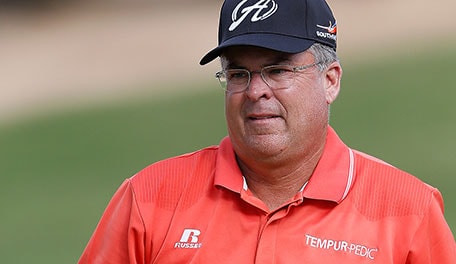 BLAINE, Minn. - Kenny Perry breezed to his second straight victory in the Champions Tour's 3M Championship, shooting a 4-under 68 on Sunday for a four-stroke victory over Bernhard Langer, Scott Dunlap and Kevin Sutherland.

After shooting a 61 on Saturday to take a four-stroke lead, Perry had six birdies and two bogeys in the final round to finish at 18-under 198. He became the first player to successfully defend a title in the tournament's 23-year history, winning for the eighth time on the 50-and-over tour.

Last year, Perry made a 15-foot birdie putt on the final hole to beat Langer by a stroke at TPC Twin Cities.

Langer closed with a 67, and Dunlap and Sutherland each shot 68.

Marco Dawson, the Senior British Open winner last week, had a 68 to finish fifth at 13 under.

The 54-year-old Perry is 46 under for his last seven rounds in the event. In five tournament appearances, he has two wins, a second, third and seventh.

Perry opened a five-shot lead with a birdie at No. 10. He had a bogey on the par-4 14th, dropping his lead back to four, but he responded with a birdie two holes later.

The day didn't start out well for Perry when his four-shot lead after the second round quickly dropped to two after a first-hole bogey coupled with a birdie by Sutherland.

Each player birdied two of the next four holes, before Perry birdied the par-5 sixth for a three-shot cushion. It expanded to four when Sutherland bogeyed the par-3 eighth.

Dealing with a painful back, Minnesota native Tom Lehman, who led after a first-round 64, shot a 69 to finish sixth at 12 under.