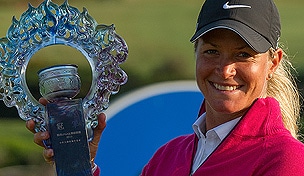 Pettersen birdied Nos. 13, 14 and 18 to pull away after her bogey on the par-5 No. 9 allowed Munoz to close within one stroke. Pettersen finished at 9-under 279, beating Munoz by five shots. The Spaniard had a final-round 70.

''It feels great to come here and defend my title and play as well as I did,'' Pettersen said. ''Since the very first shot on Thursday, the conditions gave us a very big challenge. Azahara gave me an even bigger challenge.

''I can almost thank her for keep pressing and keep pushing me because I just had to keep staying aggressive and try to make birdies.''

Earlier, Munoz had birdies on Nos. 4, 7 and 8, to continue her strong run of play after Saturday's round, when her 69 put her in contention for the first time. She went on to birdie the 12th before bogeys on Nos. 13 and 16 allowed Pettersen to pull away.

Despite falling short, Munoz expressed satisfaction with her play.

''I was 4 under through 12 holes, and I was really playing really well,'' she said. ''I made two bogeys coming in, but I hit two really good shots and one came up short and one came up long. Just misjudged the wind a little bit, but I played really well.''

Caroline Hedwall finished third at 286 after a 70 in the final round.

By winning the Taiwan event, Pettersen crossed the $2 million mark in season earnings and put herself in position to challenge South Korea's Inbee Park for the overall 2013 LPGA crown with two tournaments remaining. Park did not compete in Taiwan.

Taiwan's Yani Tseng, the 2011 Sunrise champion and former LPGA No. 1, shot 72 and finished 10 over for the tournament, 19 strokes off the pace.

Tseng's poor play on Thursday and Friday took her out of contention.