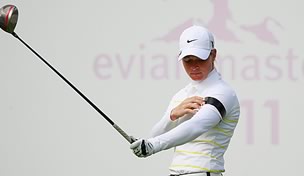 EVIAN-LES-BAINS, France – Norwegian golfer Suzann Pettersen wore a black armband at the Evian Masters on Saturday in memory of the victims of the twin attacks that have devastated her country.

Pettersen was deeply upset by Friday’s bombing and shooting deaths, and sent her condolences to the victims moments after finishing her third round.

“My thoughts and prayers are with the family and friends of those affected,” she said. “I guess it’s the biggest disaster in Norway’s history. All I can say is to send my love and all my thoughts to everyone back home.”

A massive bombing in the center of Oslo was followed by a shooting spree on an island hosting a youth retreat for the prime minister’s center-left party.

Oslo-born Pettersen’s voice broke with emotion and she fought back tears.

“There’s not much I can do; golf kind of means nothing when you know your fellow Norwegians are going through what they were today, and families might not even know if their kids, or if their family members, are still alive,” Pettersen said.

The 30-year-old found out about the attacks when her father told her after she completed her second round on Friday.

“It was shocking news, I don’t know if I ever expected to get news like that, especially in a place like Norway,” she said.