Phatlum leads by one at Ochoa Invitational 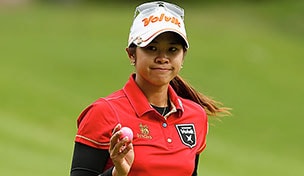 The 23-year-old Phatlum, winless in five seasons on the LPGA Tour, dropped a stroke on the par-4 14th hole and finished with a 6-under 66.

Playing for the first time in Guadalajara, Phatlum birdied the first three holes. She added birdies on Nos. 7, 9, 11 and 13, and had only 25 putts.

Amy Yang was a stroke back, and fellow South Korean players Inbee Park and So Yeon Ryu were two shots back at 68 along with Sweden's Anna Nordqvist.

Yang had six birdies and a bogey.

''I think I did everything so well today, especially putter,'' Yang said. ''I felt really good over the ball every time.''

''It really helped,'' Yang said. ''I had some chance to win before. When I didn't achieve it, I was wondering if I can do it or not. But since the first win, I have a lot of confidence, and now I'm enjoying it more.''

The top-ranked Park swept the first three major championships of the season and has three other LPGA Tour wins this season.

''My ball-striking was really good,'' Park said. ''I hardly missed any shots out there. I didn't miss any fairways and probably missed only a couple greens, but I was getting some muddy balls there and just didn't know where it was going to fly. I left a couple of putts out there and I had a lot of opportunities.''

She's winless in eight starts since the U.S. Women's Open in late June.

''I mean last few weeks, last few months actually, it's been a little bit frustrating with the putter,'' Park said. ''When I am hitting the ball good and not being able to score well because of the putting that is a little bit disappointing.''

Michelle Wie shot a 69. She won the 2009 tournament for the first of her two LPGA Tour victories.

Second-ranked Suzann Pettersen opened with a 70. The Norwegian player is coming off a successful title defense in the LPGA Taiwan, her third victory in her last five starts and fourth of the season.

Defending champion Cristie Kerr was last in the 36-player field at 77.