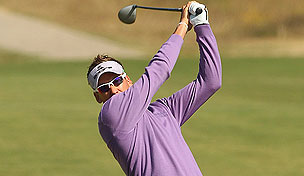 MELBOURNE, Australia – England’s Ian Poulter shot a 6-under 65 to take a one-stroke lead after the first round at the Australian Masters on Thursday.

Local golfer Ashley Hall shot a 66 at Victoria Golf Club and former champion Peter Lonard was among a group of six two shots back.

Top-ranked Luke Donald opened with a 69 in his first professional tournament in Australia. Selected as the U.S. PGA tour player of the year on Tuesday, Donald last week became the first player to win the money title on the PGA Tour and European Tour in the same season.

Donald was tied for 11th in a group of 10 players that included Greg Chalmers, who is trying to become the second player to complete the Australian Triple Crown after sweeping the Australian Open and Australian PGA last month. Robert Allenby accomplished the feat in 2005.

Poulter, playing the back nine first, had a bogey on the par-4 11th, then birdied five of the next six holes. He closed with a birdie at the par-5 ninth.

He had only seen the Victoria Golf Club course for the first time on Wednesday, but obviously liked what he saw.

“The only mistake I made today was a three-putt from about 20 feet on my second hole. So that’s probably the only frustrating thing,” Poulter said. “I hit a lot of good golf shots.”

Poulter said he was enjoying the different layout.

“It’s refreshing because a number of the courses we play week in week out it just seems like you are taking the driver headcover off on every single par 4 or par 5, and the odd par 3,” he said. “It’s nice to hit the odd iron off the tee. I enjoy that type of golf, putting it in play and giving yourself chances. I like the way this golf course sets up for me.”

Hall got as low as 8 under before a wild finish with a double-bogey on his next-to-last hole, the eighth.

The 28-year-old Hall’s round contained an eagle, six birdies, a bogey and the double bogey.

“The finish was a little bit tough. I probably took a little bit of an unwarranted risk on the 8th but I’m still happy with the way I played,” he said.