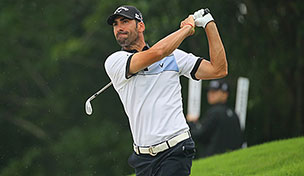 SHENZHEN, China – Alvaro Quiros and Simon Dyson each shot a 5-under 67 to share the lead after the first round of the China Open on Thursday.

The pair were a stroke ahead of a group of six golfers that included defending champion Brett Rumford of Australia and Alexander Levy of France, who briefly moved into a tie with Quiros and Dyson in the growing darkness on his back nine but bogeyed the par-3 8th hole before play was suspended. He has one hole remaining to play.

England's Ian Poulter was in a group of 12 golfers just behind at 3 under on a crowded leaderboard.

Henrik Stenson, who has a chance to take over the top ranking from Tiger Woods with a win here, had a 71. The Swede, currently ranked third, has been battling the flu this week and didn't get in any practice time on the course at Genzon Golf Club before the opening round.

''I'm not throwing up but I'm not too keen on eating, and my energy levels aren't the best,'' he said. ''It's not easy to play a golf course blind, and it definitely costs a couple of shots when you haven't seen it, or haven't played it.''

China's Guan Tianlang, 15, who became the youngest player to make the cut at the Masters last year, was level with Stenson at 71.

''I think today I played pretty consistently. My putting feels good, but needs a couple changes so if tomorrow I got more birdies, will keep me going,'' he said.

Quiros has six wins on the European Tour, but hasn't had a top-3 finish in the past three seasons. The Spaniard said he's worked on improving his putting this year and the results are starting to come - he finished tied for fifth at the Joburg Open in February and then joint 13th last week at the Malaysian Open.

''You can't see it yet on the rankings, but I have been playing better,'' said the Spaniard, ranked a lowly 240th in the world.

Dyson, who also has six wins on tour but none since 2011, said he played some of his best golf in a long time during his round, sinking six birdies to go with one bogey.

''I really didn't miss a shot. I missed two fairways, and didn't miss a green so gave myself a lot chances, which is always nice,'' he said.

Stenson is coming off a banner year that saw him become the first golfer to win the European Tour's Race to Dubai and the U.S. PGA Tour's FedEx Cup in the same season. He's gotten off to a slow start this season, however, with his best finish a tie for 14th at the Masters.

According to the European Tour, Stenson can nudge Woods out of the top spot in the rankings this week only if wins the tournament and there are no withdrawals in the field to affect the maximum number of points he'd receive.

The Swede had back-to-back birdies on his first two holes, but then struggled to find the fairway and greens down the stretch, making four bogeys. He blamed the state of the rough for some ''horrific lies.''

''I took a six on 13 by just being off the green - you can't even get the ball hardly on the green to save par. I think it's a course that when the rough gets that silly in certain areas, it kind of takes away a lot of skill,'' he said.

Poulter is also looking for a boost, which he typically gets in Asia. He's won three titles here, including the 2012 HSBC Champions at Mission Hills in Shenzhen.

He had four birdies and narrowly missed a couple others, including a 6-footer on the 9th that would have moved him into a share of the lead.

''Coming from Augusta National, where (the greens) are quite quick, you come here and the greens are very slow,'' he said. ''Even the putts that look downhill, down grain, are just not very quick and it takes some adjusting to.'' 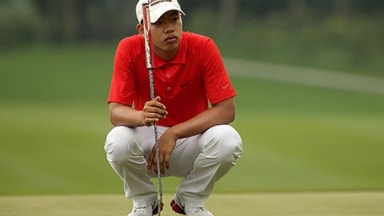 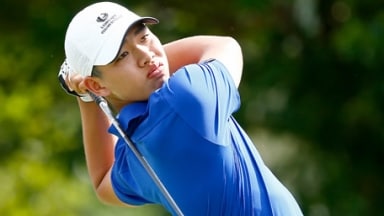 Guan Tianlang shot 4-under 68 and is one off the lead after the first round of the Asia-Pacific Amateur Championship.