FIANO, Italy – Robert Rock moved to the brink of a first European Tour title by carding a second straight 68 to extend his lead to two shots after the third round of the Italian Open on Saturday.

The 34-year-old Englishman, who held a one-shot lead from the second round, improved to 16-under thanks to five birdies at the Royal Park Roveri club, leaving him clear of a group of six players in joint-second place.

Francesco Molinari is the highest-profile player among the chasing pack, the Italian Ryder Cup star matching his 4-under 68 of Friday to lie tied on 202 with Niclas Fasth, Pablo Larrazabal, Jbe Kruger, Joost Luiten and Gary Boyd.

Rock, who has three second-place finishes to his name, recently changed his putting grip and it’s his form on the greens that is making the difference in Turin.

“I am confident because of my putting this week. I haven’t putted like this in a long time,” Rock said. “I got a little putting tip out of an old Paul Runyan golf book that a friend gave me. I was reading it on Monday and Tuesday and decided to make a small change to my putting grip.

“I didn’t even get the chance to try it in practice and took a bit of a gamble by trying in the first round, but I holed my first putt and decided to stick with it. That’s got me through so far.”

Rock, who has qualified to play in next week’s U.S. Open for the first time, followed up an early birdie on the 2nd hole with a bogey on the par-3 4th after missing the green off the tee.

He made amends by picking up four shots between the 8th and 13th holes to stay in front.

Fasth of Sweden, without a top-10 finish this season, fired a 8-under 64 for the best round of the day but Italian prodigy Matteo Manassero dropped back into a three-way tie for 12th with a 70.

Steve Webster may be down in a tie for 37th but he had the shot of the day, the Englishman holing his 5-wood approach to the par-5 11th for an albatross. 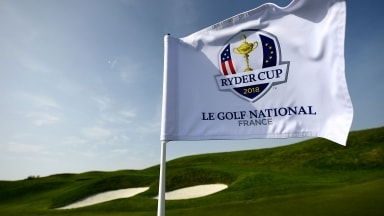 It's a good thing Justin Thomas doesn't have to worry about the Ryder Cup. Because if he did, his win wouldn't have helped him. 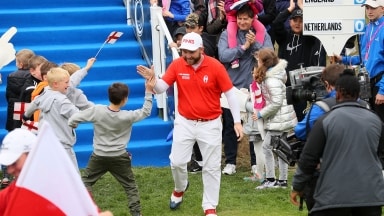 The European Tour took a break from the norm Saturday at the inaugural GolfSixes event, a six-hole match play tournament featuring two-man teams from 16 countries. 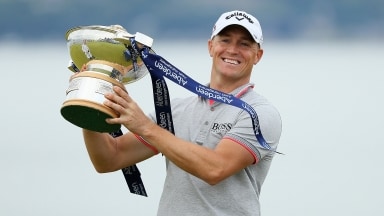 Alex Noren held off his pursuers in the final round Sunday to win the Scottish Open by one shot for his fifth victory on the European Tour.