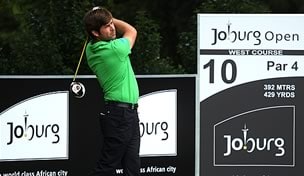 JOHANNESBURG - Robert Rock opened up a one-shot lead at the Joburg Open on Friday before thunderstorms interrupted play for a second straight day.

The Englishman shot a 4-under-par 67 on the West Course to move to 11-under 132 overall after completing his first round on the East Course early Friday. That left him one clear of South African pair Jbe Kruger (66) and Branden Grace (66).

More than half the field was still to finish their second rounds, however, when strong wind and heavy rain lashed Royal Johannesburg and Kensington Golf Club and ended play.

Overnight co-leader Jamie Elson was one of 12 players still to tee off.

Two-time defending champion Charl Schwartzel was 3 under after two rounds, just inside the halfway cut.

Rock had an early start to complete his opening round, finishing on the tougher East Course with birdies at Nos. 17 and 18. He then had an eagle and four birdies on the West layout to open a narrow advantage in the second European Tour event of the season before the rain came down.

I dont like 4:30 a.m. alarm calls, he said. The aim is to play your way out of those by the weekend.

Behind him, Kruger and Grace had matching 5-under rounds to move into a share of second while another home player, Michiel Bothma, also finished two rounds for 9-under 134 and fourth.

Masters champion Schwartzel struggled with his putting as four birdies and a bogey left him with a 3-under 68 on the West Course and a tie for 56th. He is just inside the projected cut having won here in 2010 and 2011.

The 2002 PGA champion Rich Beem had five bogeys in his 2-over 73 to almost certainly miss the cut while American compatriot Scott Pinckney had a double bogey and a bogey in his first four holes to slip down the leaderboard before play was suspended.