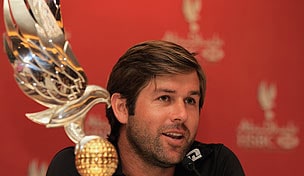 The 34-year-old Englishman, who cracked the top 100 with his Abu Dhabi win, has found celebrity life to his liking. He was mobbed by autograph seekers when playing a pro-am tournament Wednesday. Hes also picked up a lucrative endorsement, signing on as the golfing ambassador for the opulent Emirates Palace hotel in Abu Dhabi.

Plenty of people were still asking Rock about his shocking win over 14-time major winner Woods. They came into the final round tied, but Rock held his nerve to win the tournament by a shot over McIlroy. Woods was another shot back in a tie for third.

It doesnt get much better than that for me, Rock told The Associated Press on Wednesday as he walked down the fairway of the first hole of the Emirates Club. To make it better, it would need to be the same sort of scenario in a major championship.

The chances of actually getting the pairings right for that are slim I think I will have a chance to win other tournaments, but that one will definitely be a lasting memory.

Rock, who won his first European Tour event last year, said the win against Woods had given him confidence and a sense he can compete with anyone.

Certain occasions during my career, Ive played with people that have really made me nervous, and that was probably the most, he said of Woods. I played with Nick Faldo, who was a hero, and so was Seve (Ballesteros). After you do that, you are not scared of any groups you get. Id love to play with him (Woods) again. He was great company.

Rock dismissed critics who have suggested Woods can be rude on the golf course, after he was caught spitting on the green last year in Dubai. He said the former No. 1 repeatedly complimented him on his shots and put up with a packed gallery in Abu Dhabi that at times became a tad unruly.

As far as golfing etiquette, it couldnt be better. Its a bit unfair when people criticize him, he said. There are a lot of distractions for him when he is playing, people talking, people using their phones, people taking pictures when they shouldnt.

That was frustrating for me when I was hitting shots. I lost my temper a few times when that happened, and he doesnt do that. He ignores it and just carries on.

Rock, who until last month was better known for his relaxed demeanor and 1970s style haircut, said breaking into the top 50 would be a goal'in time to get him an invitation to the Masters. But his first priority is to win in Dubai.

Im up against two great players in that group, Rock said. The whole field is full of potential winners. The European Tour is very, very strong. I think my victory in Abu Dhabi proved that to some extent, that somebody down the lower ends of the world rankings can win a tournament.

McIlroy, who won here in 2009, is looking to overcome inconsistent driving and mistakes in Abu Dhabi. Among the most costly was a two-shot penalty in the second round for brushing away sand in front of his ball in the rough on the ninth hole.

I didnt feel like I played all that well in Abu Dhabi, McIlroy said. I scored very well and was able to get myself into contention, which was great.

I felt like I needed to work on a couple of things last week, which I did, and I feel like theyre getting better.

Third-ranked Lee Westwood is in the field, looking to improve on a slow start to the year. He finished tied for 17th in Abu Dhabi and tied for 12th at the Qatar Masters. Fourth-ranked Martin Kaymer is competing after finishing tied for ninth in Qatar and missing the cut in Abu Dhabi.