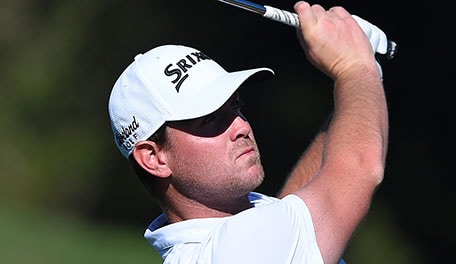 Sucher had nine birdies in his bogey-free round at Montreux Golf and Country Club for a three-point lead over Patrick Rodgers. Under the modified Stableford format, players receive 8 points for double eagle, 5 for eagle, 2 for birdie, 0 for par, minus-1 for bogey and minus-3 for double bogey or worse.

''I think it's the format I needed with the year that I've had,'' Sucher said. ''Like, 'All right, let's go out and like don't try to post a number, just make a bunch of birdies.'''

Sucher has made only four cuts in 16 starts in his first season on the PGA Tour. The 28-year-old former Alabama-Birmingham player won the Web.com Tour's Midwest Classic last year.

''I had last week off, which was nice,'' Sucher said. ''Worked on a few things with my coach, and they all panned out good today. ... I kept it in play and, obviously, I putted really well, which was the key.''

Rodgers had eight birdies and a bogey.

''I scored it really well today,'' Rodgers said. ''Took advantage of the easy holes and made a lot of birdies when I had chances to. I felt comfortable on the greens. The greens are nice and smooth this morning. And I was obviously really happy with it.''

The 23-year-old from Stanford has earned enough money through sponsor exemptions to become a special temporary member of the PGA Tour. With just over $800,000, most of that from a runner-up finish in the Wells Fargo Championship in May, he is virtually assured of a PGA Tour card for next season.

''Obviously, starting on the Web and getting a win under my belt gave me a lot of confidence and freed me up to take advantage of some opportunities out on tour,'' Rodgers said. ''To take advantage of that there in Charlotte and lock up special temporary status was huge and has really freed me up this summer. Although I haven't played my best as of late, I feel really comfortable with where I am and I'm excited about next year being out here full time.''

''You hate kind of giving two points back on the last four holes when you really haven't missed a shot, haven't been in much trouble,'' Barnes said. ''So to get that last one, after hitting a good drive and a good second shot, we just misjudged about a club on the second shot, it was a good finish.''

Defending champion Geoff Ogilvy closed with a double bogey for a minus-1 total. Last year, he finished with a tournament-record 49 points for a five-point victory.