TOLEDO, Ohio – One of the most historic and inspirational achievements in Olin Browne’s career came when he wasn’t playing.

For Browne, just being a part of the patriotic competition was eye-opening.

“I learned how much fun it can be to be part of a winning team when you don’t have to carry the lumber,” he said. “Those guys were so good, and they played so great, and Paul set up such a great team situation, it was just a blast to be a part of it.”

Other players might not have been able to handle it, not being a player while pumping up the same adversaries you compete against every week. But Browne relished it.

“He and I had been talking about it for years leading up to it,” he said. “And I was honored and thrilled to be invited to be a part of it.”

Still, he said that victory and his one at Inverness Club on Sunday – the biggest of his career – had very little in common.

“There’s a difference between theory and reality, and when you’re dreaming about things that happen in life, that’s theory,” the introspective and thoughtful Browne said. “And then when the situation presents itself, that’s reality. And even though they’re connected somewhat, they’re not related. You know what I mean?”

NO TWO IN A ROW: Russ Cochran was still coming off the high of winning the Senior British Open when he arrived at the U.S. Senior Open.

Despite being tired, and dealing with the lingering aspects of his first major win, the left-hander from Kentucky still did quite well, thank you.

“The big thing is, I’m usually great at dismissing a tournament and getting right into another tournament,” he said. “But with family and friends and not speaking with them that much with the phone situation (a 5-hour time difference) in England, when I came back to the States it seemed like it ran into three or four days. I was still answering questions on Thursday when I was getting ready to play (here) and that was a very tough thing to do.”

He did fine, however.

Cochran matched a tournament record with five consecutive birdies while shooting a 2-under 69 in Sunday’s final round at Inverness Club. He followed rounds of 70, 69 and 73 to finish at 3-under 281.

He birdied so many in a row that he lost track while going over the details.

Cochran said he grew tired as the week wore on, particularly when he was forced to return to the course early Saturday morning to complete his rain-delayed second round.

“My son’s 27 and in great shape and he was talking about being lethargic and his legs feeling bad and stuff,” said Cochran, referring to Ryan, who was caddieing for his dad this week. “That kind of mirrored what I was feeling.”

QUOTE OF THE DAY: Olin Browne, asked what it feels like to finally have his name on a major championship trophy: “You know, I’m just not sure at the moment. When I started playing golf, my bride – she wasn’t my bride then – and I would go to the driving range, a little dumpy par-3 course with a driving range called Arroyo Seco. She’d have her books out, she was pre-med and a French major and she was doing her homework. And I’d tell her, `This is the U.S. Open. What’s the shot here?’ She would say, `All right. U.S. Open, 700 yards, par 4.’ I said, `That’s not how it works. How about 440, dogleg right?’ And then I’d hit a shot. So this goes back a long way for us.”

The joint’s feature item might have fueled one of the day’s best rounds at the U.S. Senior Open.

Steve Pate shot a 68 that left him at 277. He credited a Toledo staple for his strong showing.

“I think two double-dogs down at Packo’s were a big help today,” he cracked.

After shooting a 1-under 70 in Sunday’s final round of the U.S. Senior Open, the Florida pro said he had a long couple of weeks ahead – but mostly because he’s the caddie for PGA Tour pro Zach Johnson.

“I fly into Cedar Rapids (Iowa) at 8, play in Zach’s pro-am for his charity, jump on a plane and we all fly to Akron” where Johnson will play in this week’s Bridgestone Invitational, Green said. “Caddie Akron, caddie Atlanta (where the PGA Championship will be played the following week), then I think I have my first full week at home since May.

“I’m kind of looking forward to that. I’m a little worn out.”

DIVOTS: Browne became just the second player in tournament history to go wire-to-wire, joining Dale Douglass (1986 at Scioto Country Club). … Browne had finished tied for third (last year at Sahalee CC) and tied for 10th (2009 at Crooked Stick) in his two previous Senior Open appearances. … Browne’s victory made it 21 times in the 32 U.S. Senior Opens that the third-round leader has gone on to win. … The lowest score over the final 36 holes was by 66-year-old Hale Irwin (66-68). … Irwin finished in a tie for fourth, marking the record 204th time he has done so in his Champions Tour career. He broke a tie at 203 with Bob Charles. … Irwin also has 32 top-10 finishes in majors, two more than Jack Nicklaus had in his career. 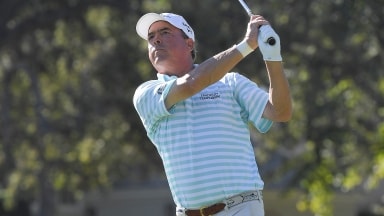 Browne eyes return to Colonial and to 'normal'

No one is sure what 'normal' will look like when golf returns to action at Colonial, but past champion Olin Browne is ready to find out. 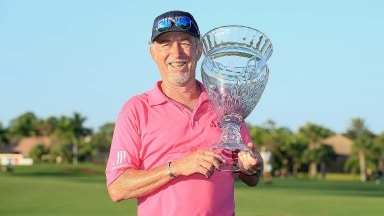 Miguel Angel Jimenez won the Chubb Classic on Sunday for his seventh PGA Tour Champions title, beating Bernhard Langer and Olin Browne on the first hole of a playoff. 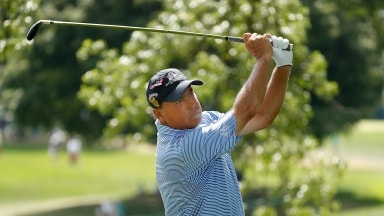 Olin Browne and other PGA Tour Champions golfers took to Twitter to criticize a PGA Tour program that would offer cards to top college players.