Ryu shoots 61; Lexi 10 back in Australia 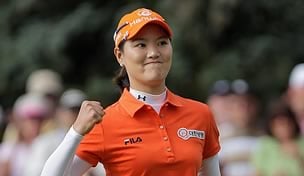 GOLD COAST, Australia – U.S. Open champion So Yeon Ryu shot an 11-under 61 on Friday to take a four-stroke lead after two rounds of the Australian Ladies Masters.

The South Korean’s score would have tied the course record held by seven-time Masters champion Karrie Webb, but it will not go in the books due to the lift, clean and place rule in effect on the fairways because of the wet course due to recent rain.

Before Friday, Ryu marked her balls with “62” to represent her career-low round. Now she will be remarking them.

“Finally I can change the number,” Ryu said. “The last shot I was really, really nervous, but I made it, so now I’m really looking forward to the last two rounds.”

Christel Boeljon finished birdie-birdie-eagle to shoot a 65, putting her in second place. The Dutchwoman’s three on the par-5 18th came on a 50-foot putt.

“It’s a great feeling, great way to end my round,” Boeljon said.

First-round leader Lee Bo-mee (69) and Nikki Campbell (67) were tied for third, seven strokes behind Ryu. Diana Luna and Amelia Lewis each shot a 64 for fifth place along with Felicity Johnson (68), eight strokes behind.

Sixteen-year-old Lexi Thompson was two shots off the lead after Round 1, but a second-round 70 has her 10 shots behind Ryu.