Schwartzel, Goosen one back at Volvo 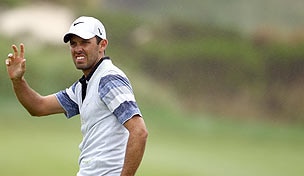 Getty Images
GUADALAJARA, MEXICO - NOVEMBER 12: Sophia Sheridan of Mexico hits a shot during the second round of the Lorena Ochoa Invitational Presented by Banamex and Corona Light at Guadalajara Country Club on November 12, 2010 in Guadalajara, Mexico. (Photo by Michael Cohen/Getty Images)  -

GEORGE, South Africa – Branden Grace of South Africa and Nicolas Colsaerts of Belgium had contrasting third rounds in wet and windy conditions to share the lead at the Volvo Golf Champions on Saturday.

South African pair Retief Goosen (70) and Charl Schwartzel (68) are a stroke back.

After two days of benign weather, the Links course showed a glimpse of its fearsome reputation as the wind and intermittent rain made for a difficult day.

It took its toll on Spain’s Pablo Martin. The three-time European Tour winner shot a 90 to sit last on 20 over.

“Today the course played more like we know it. There were some holes where par was a very good score,” Goosen said.

The first six holes in particular played the toughest they have all week.

Grace came through that span at 2 over, while Colsaerts was happy to make it through in 1 under.

“I think I got a little lucky the first six holes,” Colsaerts said. “I could have easily been 2 or 3 over. I thought the first five or six holes were the toughest of the bunch today.”

He relied heavily on his big drives, particularly on the par-five 18th where he was left with an 8-iron into the green on his way to making an eagle.

“I hit an enormous drive, I don’t even know how far it went. I think I had 186 yards to the front of the green. I think that if you find yourself in contention over the last couple of holes, you’ve got to go with your strength.”

Grace tried to remain positive about the double bogeys he made on the back nine. On the par-four 12th his drive kicked right and into a pot bunker, and on the par-three 17th he hit his tee shot over the green and very nearly into the hazard.

“The conditions were really tough out there and I always knew I would make mistakes. Unfortunately it happened on the tough holes. But I still think I handled it pretty good. It was a long day and I’m still pleased to be at the top.”

European Ryder Cup captain Jose Maria Olazabal maintained his good form with a 72 and an 8-under 211 total going into Sunday’s final round.