Scott up by 4 after third-round 66 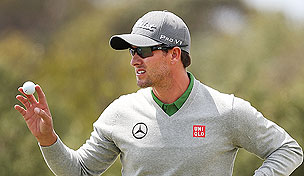 Getty Images
“Rudolph and I wish you all a very Merry Christmas!!!” – McIlroy, via Twitter on Christmas Day.  -

MELBOURNE, Australia - Defending champion Adam Scott shot a 5-under 66 Saturday to open a four-stroke lead at the Australian Masters and close in on a second consecutive win Down Under.

The Masters champion and winner of last week's Australian PGA has a three-round total of 14-under 199 at Royal Melbourne.

''I'm in a really good position for tomorrow,'' Scott said. ''I put the ball in play and made a couple of putts for the first time this week.''

Vijay Singh shot a 63 and was in a four-way tie for second with Australians Matthew Griffin (69), Nick Cullen (69) and Nathan Holman (70). American Matt Kuchar was sixth after a 67, five strokes behind Scott.

This is Scott's first trip back to Australia since winning at Augusta in April. He'll partner Jason Day next week in the World Cup, also at Royal Melbourne, then play the Australian Open at Royal Sydney the week after.

Without mentioning a number, Scott says he could improve on Sunday and win twice in a row.

''A good score is going to be out there,'' he said. ''Not wasting any shots and taking advantage of the good ones. Vijay must have done something like that today.''

Singh bogeyed the par-4 ninth, but had three birdies on the back nine to move into contention. He started the day seven strokes behind Scott.

He credited a recent switch from a long putter to a conventional one for his strong play Saturday.

''The first nine holes were incredible, I thought I could have birdied every hole. I was three under, but the first eight holes I didn't hit anything outside of 10 feet,'' Singh said.

He will play in the final group with Scott, a rare Sunday occurrence for the Fijian veteran who has battled injuries over the past several years.

''After '08 I had a couple of operations on my knee so that kind of got me back two years,'' Singh said. ''And then you start to limp and your whole body kind of reacts differently - I started to have a lot of back aches. But last year it started to get better, and I'm much stronger, healthier and happier.''

Scott said ''it's been awhile'' since he and Singh played together.

''His game is in great shape,'' Scott said. ''This course doesn't favor anybody. With good playing, there's a good score there.''

Jarrod Lyle, continuing his comeback from a 20-month layoff because of leukemia, shot 70 Saturday and was at even par.

Lyle was diagnosed with leukemia in March 2012 when he was a regular on the PGA Tour. Lyle, who had leukemia for the first time when he was 17, has a medical exemption to return to the PGA Tour when he's ready. After making the cut Friday, he said that might not be until late 2014.