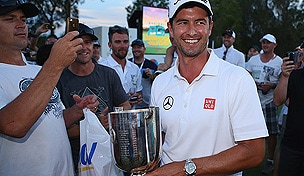 GOLD COAST, Australia - Adam Scott shot a 4-under 67 to win the storm-delayed Australian PGA by four strokes on Sunday.

Scott and playing partner Rickie Fowler marked their balls on the 12th fairway after a severe storm warning suspended play with Scott holding a one-shot lead.

When Scott returned, his iron shot from the fairway nearly holed out for an albatross and he made the 1-foot eagle putt.

Scott was 4 under in his seven holes after the weather suspension. Fowler finished second with a 68.

Making his first appearance back in Australia since his April win at The Masters, Scott finished with a 14-under 270 at Royal Pines.

Scott joins Greg Norman, Craig Parry, Peter Lonard, Robert Allenby and Peter Senior as the only Australian golfers to add the Joe Kirkwood Cup for winning the Australian PGA to the Australian Open and Australian Masters titles in their careers. Those three tournaments are considered the Australian majors.

''I came out and knew I had to do something great to win this,'' Scott said. ''It's been an incredible year since April, and so great to come home. I've had a great week.''

''I had some good momentum going up until we had the rain delay,'' Fowler said. ''I got to within one and then he came out swinging.

''He made some great swings coming down that last stretch. So it's a little tough to catch a guy when he's making an eagle and a couple of birdies.''