Senior leads by one at Champions Tour finale 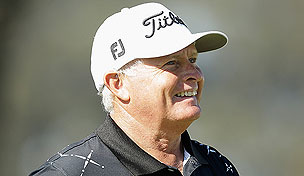 Getty Images
Tim Clark of the Republic of South Africa makes a tee shot on the 11th hole during round three of the Frys.com Open at the CordeValle Golf Club on October 12, 2013 in San Martin, California. (Photo by Robert Laberge/Getty Images)  -

SAN FRANCISCO – Peter Senior is a big winner in Australia. He'd like at least one win in the United States.

He got off to a good start Thursday in the Charles Schwab Cup Championship, shooting an 8-under 63 to take a one-stroke lead in the Champions Tour's season-ending event.

The 54-year-old Senior had nine birdies, an eagle and three bogeys at TPC Harding Park to match the event first-round record set by Jim Thorpe in his 2003 victory at Sonoma Golf Club.

''That was probably the best round of golf I've played this year,'' Senior said. ''I putted well and hit it well.''

''That's the only disappointing thing,'' Senior said. ''It's such a great tour and I've enjoyed every minute of it. It's a little disappointing I haven't won in four years. You've got to be fortunate at the right times and I haven't done enough down the stretch, going par, par, par when I needed a birdie to make the difference. Hopefully, it might happen.''

David Frost shot 64, missing a short putt on the 18th hole. Fred Couples was third at 65, and Mark O'Meara had a 66. Bernhard Langer, Steve Elkington and Duffy Waldorf shot 67.

Charles Schwab Cup points leader Kenny Perry topped the group at 68. Perry entered the event 612 points ahead of second-place Langer. If Langer wins the tournament, Perry needs only to finish fifth or better take the season title and $1 million annuity.

Senior shot a 6-under 30 on the front nine, culminating with an eagle on the ninth hole. He birdied Nos. 11 and 12 and allowed himself to start thinking big.

''I started counting the easy holes that I could possibly birdie,'' he said. ''As soon as I thought that, I made a bogey.''

Frost has two victories season, including his first senior major victory at the Regions Tradition in June.

''It was nice to get off to a good start,'' Frost said. ''You want to get excited but there's so much golf left to play you can't get ahead of yourself because of a couple of early birdies.

''I think I've had a great year. I didn't drive the ball as well as I should have and that's something that has held me back. I'm not too disappointed. I'm happy to have played solid golf and here is like a tournament within a tournament. There's no reason I should not focus on the task at hand.''

Couples is dealing with neck and back issues. He had a double bogey on the eighth hole.

''I hit what I thought was as good a shot as I could and no way could it stay on the green,'' Couples said. ''I kind of fluffed a pretty difficult chip to about 5 feet and missed it, so that was that.''