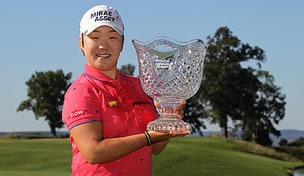 WILLIAMSBURG, Va. – Jiyai Shin needed only 20 minutes Monday to do what she couldn't in eight hours a day earlier.

The South Korean made a two-putt par on the ninth playoff hole, beating Paula Creamer to win the Kingsmill Championship and end the longest playoff between two players in LPGA history.

Shin and Creamer played the 18th hole eight times Sunday in an attempt to break the tie before darkness forced a suspension. About 1,000 fans turned out the next morning to see them go at it again. But after just one more hole, the par-4 16th, the matter was settled.

''We were so hungry for the win,'' said Shin, who like Creamer, was seeking her first LPGA victory since 2010.

''I can't believe because I did a hand operation in June, and then after that, two months I didn't play,'' Shin said. ''So I feel like I take a little bit long time for the win, but I'm really happy it's coming quick.''

Creamer hit her 30-foot, double-break, downhill first putt about 5 feet past the hole. She then missed the left-to-right bender coming back, the ball hitting the right edge and spinning out. Shin's first putt, also breaking left to right, stopped 3 feet from the cup.

Seeing Creamer miss made her short putt all the more intimidating.

''I was really nervous with it. But after, when I make that, I was really happy,'' Shin said.

Creamer, who hasn't won since the 2010 U.S. Women's Open, suspected a second hole was going to be necessary.

''I thought I hit a great putt, the first one,'' she said. ''It's so much faster than the putting green. ... I felt good over the next one. It was tough because it was one of those dying ones.''

Shin said Creamer is a ''great putter,'' and she was thinking about how she was going to play the par-3 17th.

Afterward, both were making arrangements to fly to England for the British Women's Open. Creamer was trying to draw on how well she played on the River Course and carrying that momentum over, even while still dwelling a bit on how a victory got away.

The final hole marked a dramatic conclusion to the tour's return to Kingsmill after a two-year absence. It was not unlike the final hole of regulation, when Creamer missed a 5-foot putt for par that would have won the tournament, leaving them tied at 16 under.

Creamer finished with an even-par 71 Sunday, and Shin shot a 69.

Shin had a good chance to win on the first extra hole Sunday but left a 6-foot birdie putt short. Both players came close to winning on the second playoff hole, got up and down for pars from bunkers on the third and two-putted for par on the fourth, fifth and sixth.

Creamer sank a 5-foot putt to save par and extend the playoff on the seventh, and both two-putted on the eighth.