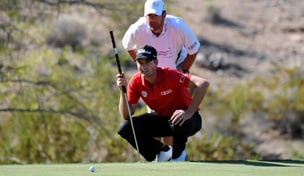 Getty Images
DUNSHAUGHLIN, IRELAND - SEPTEMBER 22: Michelle Wie of the USA is introduced during the opening ceremony prior to the 2011 Solheim Cup at Killeen Castle Golf Club on September 22, 2011 in Dunshaughlin, County Meath, Ireland. (Photo by David Cannon/Getty Images)  -

Making his first start since helping the U.S. win the Presidents Cup, the 2012 U.S. Open champion shot an 8-under 63 to reach 15 under. He had nine birdies and a bogey – on the par-5 16th in his opening nine.

''The ball is really going far,'' Simpson said. ''I was wondering why the scores were so low yesterday morning because I thought the ball might go a little shorter. But the ball was getting out there and the golf course played a little shorter than I thought it would, and I just putted well and kept going.

The 63 matched the lowest round of his PGA Tour career.

''There's no wind, no clouds in the sky and it's really quiet, so it's easy to kind of daydream,'' Simpson said. ''You've really got to focus on what you're doing and talk to your caddie, at least for me. I talk to him about what we're trying to do here, where we're trying to hit the ball.''

The four-stroke lead broke the tournament second-round record of three set by Lon Hinkle in 1984 and matched by Rich Fehr in 1996 – both when the event was 90 holes.

J.J. Henry followed his course-record 60 with a 71 to join John Senden, Jeff Overton, Chesson Hadley and Jason Bohn at 11 under. Bohn had a 64, Senden and Hadley shot 66, and Overton had a 68.

''I need to keep on making birdies out there,'' Senden said. ''It's not as much building a score, it's just about doing a great job on making birdies, and if that's good enough to do it, well, hopefully it'll be me.''

''It was a great day,'' Hadley said. ''It's been a fantastic start to the week, and to be at 11 under and to have a chance going into the weekend is awesome. I've been in this position before as far as Web.com Tour, and certainly a little bit different stage out here on the PGA Tour. Just looking to manage the nerves tomorrow and just realize it's just golf, and let's just go have some fun.''

Henry had three bogeys and a birdie on his first four holes.

Defending champion Ryan Moore and Russell Knox were 10 under. Moore shot 63, and Knox had a 65.

Argentina's Andres Romero, second after a first-round 61, had an 81 to miss the cut.

Zach Johnson, the highest-ranked player in the field at No. 11 in the world, made a cut on the number at 3 under after a 70. Jimmy Walker, Frys.com Open last week in California, also was 3 under after a 68.