Simpson one back of Palmer and Dufner at Phoenix Open 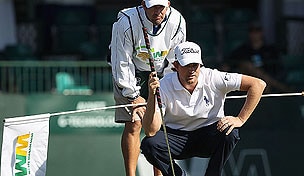 SCOTTSDALE, Ariz. – Jason Dufner finished off a 7-under 64 on Friday for a share of the lead with Ryan Palmer after the first round of the Phoenix Open.

Dufner, a playoff loser last year to Mark Wilson at TPC Scottsdale, birdied two of his five holes Friday morning after play was suspended Thursday because of darkness.

Forty-two players completed the first round Friday. For the second straight day, the start of play was delayed an hour because of frost. Last year, frost and frozen greens delayed play nine hours during the week, forcing a Monday finish.