ENDICOTT, N.Y. – When Joey Sindelar celebrated his 50th birthday in March 2008, he hit the ground running on the Champions Tour.

After carding three top-5s in his first eight starts, including a tie for third in the Senior PGA Championship at Oak Hill, it seemed a matter of time before he would notch that first victory.

Well, the clock’s still ticking. Sindelar is preparing for Friday’s opening round of the Dick’s Sporting Goods Open.

“I’m not going to say I’m surprised, but I will say disappointed and anxious to get it over with,” said Sindelar, who’s healthy again. “But you look at the kind of golf that’s getting played out here – you’ve got to play golf. This is no gift. Every month we get another guy who’s very, very equipped to win.

“When that win finally comes – and I hope it does – it’ll be very emotional I’m sure. I just try to keep honing my game and doing better. I feel like I’m getting better.”

In more ways than one.

The one top-10 in eight starts this year is OK. Not limping around a golf course is much better.

In April, Sindelar was forced to withdraw from the Liberty Mutual Legends of Golf because of a bad back. An MRI and X-rays revealed a “vicious” case of arthritis, and Sindelar has begun an exercise regimen to strengthen his core and keep it strong.

“If we don’t pay attention, this will continue to annoy me, I think,” he said.

And he won’t soon forget that pulmonary embolism he suffered during the third round of the Charles Schwab Cup Championships in October 2009.

“When it was happening, they kept checking all my cardiovascular stuff and I kept saying, ‘But I already know I’m fine.’ I didn’t have any pain,” he said. “That was what was odd. If I’d have had pain in my lungs or in my legs where the clot came from, they would have figured it out.”

A CAT scan found evidence of a problem behind Sindelar’s left knee, and he counts himself a lucky man. Doctors told him his right lung had completely shut down and the left lung was close, too.

“They said if I’d played another hole, it would not have been a good story,” Sindelar said.

The closest the 53-year-old Sindelar has come to winning on the Champions Tour has been three seconds and three thirds in 73 events.

Sindelar beat Arron Oberholser on the second hole of a playoff to win the 2004 Wachovia Championship, snapping a 370-tournament winless streak on the PGA Tour that had stretched over 14 years.

It was the second-longest winless streak on tour – Ed Fiori went 409 starts between victories – and it serves as motivation today.

“I will use that for inspiration, I promise you,” he said. “From a competitive sense, I feel like I’m good enough to do this. Yes, there’s a certain frustration level, but it’s not like I’m shaking on the first tee, going, ‘This has got to be the week.’ “

There would be no better place for that breakthrough victory than the Dick’s Sporting Goods Open. It’s played at En-Joie Golf Club, a short drive from Sindelar’s home in Horseheads, N.Y. Sindelar won the B.C. Open twice (1985 and 1987) at En-Joie when it was part of the PGA Tour.

Tom Watson, now 61, just won the Senior PGA Championship, 60-year-old Bob Gilder took the Principal Charity Classic. All four winners of the Dick’s Sporting Goods Open have been over age 53 at the time of their victories.

Watson returns to En-Joie for the first time since he finished in a tie for 21st at the 1976 B.C. Open.

“Well, it’s just time to come back. The people are just so generous up here it’s really a pleasure to be back,” said Watson, ranked third with 850 points in the race for the Charles Schwab Cup. The two players ahead of him – Tom Lehman at 1,494 and Nick Price at 899 – also are in the field this week.

“I’m probably at somewhat of a disadvantage because I haven’t played this course,” Watson said. “I don’t remember it. I hope to get to know it a little bit better and at the end of Sunday have a chance to win.”

Loren Roberts will celebrate his 56th birthday on Friday, and try to accomplish something unprecedented at this tournament – defend his title.

“Last year, I kind of got my season going here,” Roberts said. “Hopefully, I’m going down the same path this year.”

Divots: Hal Sutton comes into the Dick’s Sporting Goods Open with a string of 86 consecutive holes without a bogey. Sutton’s last bogey came at the fourth hole on the second round of the Principal Charity Classic. The record is 98 holes by Morris Hatalsky in 2003. … With 202 career top-10 finishes, Hale Irwin is just one shy of tying Bob Charles for the lead in that category in Champions Tour history. 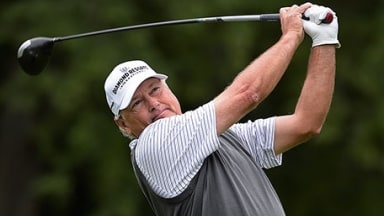 Cook-Sindelar team up for 10-under 60 at Legends