Singh moves within 2 shots of lead in Hawaii 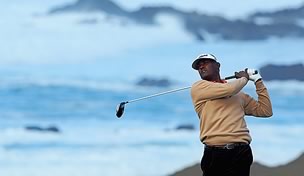 KAPOLEI, Hawaii – Vijay Singh shot a 6-under 66 on Saturday to move into second place after the second round of the Pacific Links Hawaii Championship.

Singh, playing his first event on the Champions Tour, moved within two shots of overnight leader Mark Wiebe, who had a 69 Saturday after opening with a 64. Singh carded a 69 in the first round. The three-time major champion and former world No. 1 had six birdies in his bogey-free second round.

Corey Pavin (68) and Brian Henninger (67) were three shots back in a tie for third place, while Sandy Lyle (70) and John Cook (66) were a further stroke back.