Singh a no-show for Open qualifier 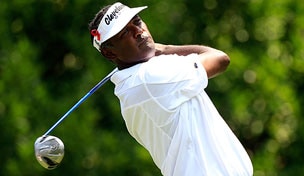 Getty Images
IRVING, TX - MAY 23: Rory Sabbatini misses an easy birdie putt on the 16th hole during the third round of the HP Byron Nelson Championship held at the TPC Four Seasons Resort Las Colinas on May 23, 2009 in Irving, Texas. (Photo by Marc Feldman/Getty Images)  -

COLUMBUS, Ohio – Vijay Singh has failed to show up for his tee time in a U.S. Open qualifier. It’s likely his streak of playing in every major championship for the last 17 years is about to end.

Singh shot a 7-under 65 in the final round of the Memorial on Sunday, then told reporters he would not try to qualify Monday. His only other chance would be to win or finish second in the St. Jude Classic in Memphis, Tenn., this week, although it was not certain that the three-time major champion would even play that tournament.

Singh has played the last 67 majors, the longest active streak in golf. A year ago, he was given a special exemption to the U.S. Open at Pebble Beach, but U.S. Golf Association executive director Mike Davis has said no special exemptions were likely to be awarded this year.