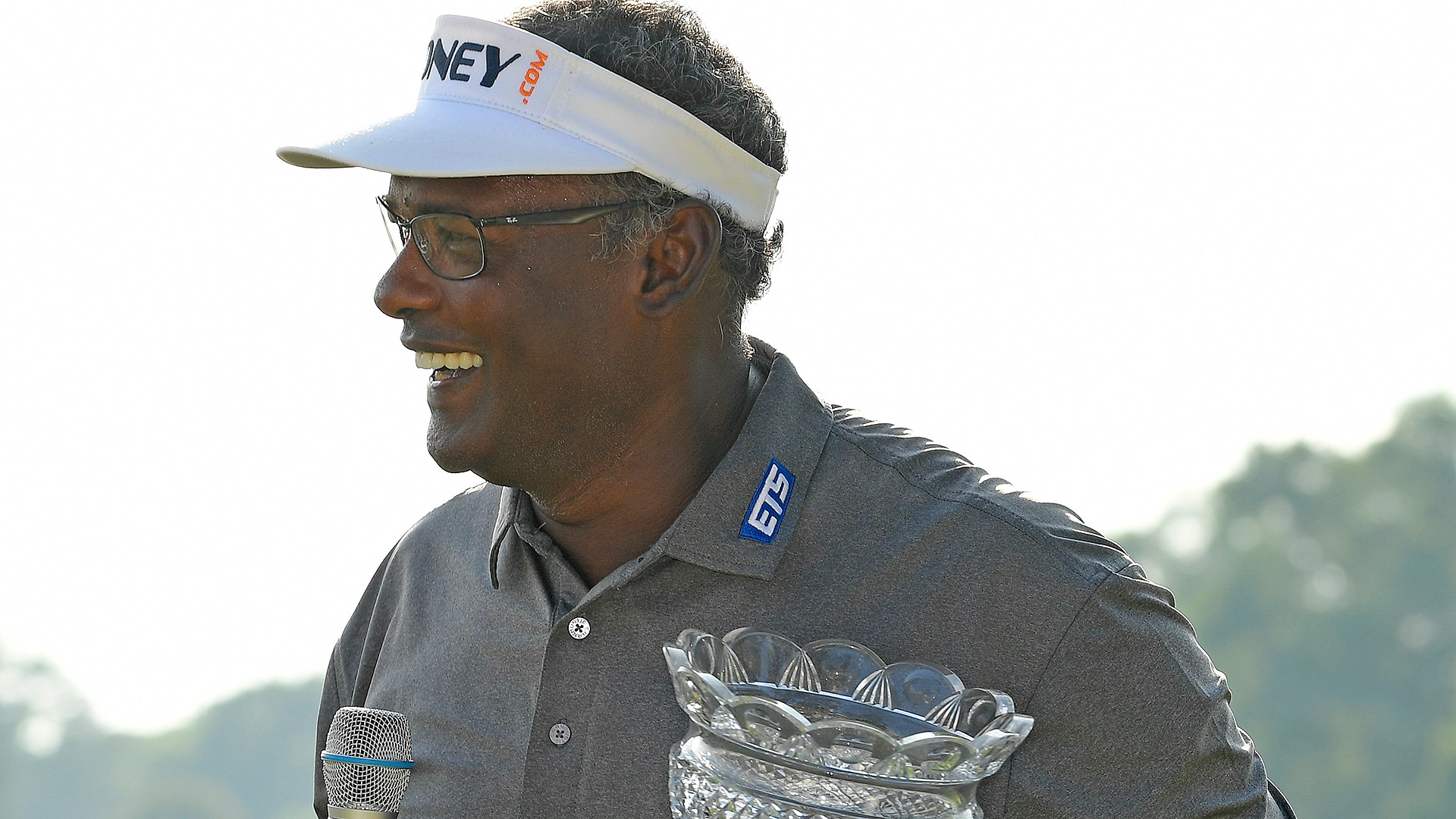 HIGHLAND PARK, Ill. - Vijay Singh hit a perfect approach to set up the winning playoff birdie. His celebration as the ball rolled into the cup was nowhere near as spectacular.

Singh closed the door on Jeff Maggert on the second playoff hole to win the Constellation Senior Players Championship on Sunday, giving an understated fist pump as his birdie putt dropped from about 2 feet. It was the first major title on the PGA Tour Champions for the 55-year-old Fijian, a past winner of the Masters and two PGA Championships.

''It's a little different,'' Singh said. ''It's a senior major, you know, so it's - any time you win a tournament no matter what it is, you feel accomplishment, and that's what I feel. I feel like I played well, and it's a win. A win is a win.''

Maggert began the day tied with McCarron and Bart Bryant for the lead. Singh was one shot back, but a crowd at the top of the leaderboard thinned out, turning it into a two-man race.

''I wasn't really watching the scoreboard or Vijay,'' Maggert said. ''Like I said, I thought I needed to shoot 5-, 6-, 7-under today to really kind of ice it. So I was really focused in on making seven or eight birdies today. ... You know, I thought some other scores would come into play there toward the end, but the last two or three groups looked like they were struggling, other than me and Vijay.''

Singh and Maggert posted identical scores through the first 15 holes. But Maggert bogeyed 16, and then missed chances to win in regulation and on the first playoff hole.

His 15-footer on the 72nd hole rolled wide, forcing the playoff, and a downhill 12-footer on the same green went just past the edge.

Singh made just one bogey this week, and that came in the third round. He had five birdies Sunday and made some neat par saves to get into the playoff.

His tee shot on 17 landed near the trees to the right of the fairway, and his approach on 18 wound up in a bunker. But Singh blasted to within a few feet to match Maggert's par and send a senior major to a playoff for the first time since the 2015 Regions Tradition.

Singh played sporadically on the over-50 tour during his first few years of eligibility but is playing more often against men his age these days.

''To win the first major on this tour, I'm really excited about that,'' Singh said. ''Winning my first tournament at the beginning of the year was big, and now I've won this one, so I look forward to winning a lot more now. I always say, the first one, you get the first one out of the way, you can win a lot more after that.''

McCarron was trying to join Arnold Palmer and Bernhard Langer as the only back-to-back winners of this major. He came back from a six-shot deficit to win at Caves Valley near Baltimore last year and got off to a good start on Sunday.

He birdied the first two holes to reach 18 under. But bogeys on the par-4 seventh and ninth holes knocked him off the lead. His tee shot on No. 7 rolled into a hole at the base of a tree and forced him to take an unplayable lie.

Bryant (72) and Kenny Perry (68) finished in a pack at 16 under. Illinois golf coach Mike Small (71) finished one shot behind them, while three-time champion Bernhard Langer closed with a 74 to finish at 12 under after starting the day two strokes back.