PEBBLE BEACH, Calif. – Jeff Sluman dropped four strokes behind Jay Haas early in the final round of the First Tee Open and figured he was playing for second place at best.

Instead, the man Ben Crenshaw calls the King of Pebble Beach worked his way to the top of the leaderboard then held on while the rest of the field dropped off one by one.

Sluman shot a 2-under 70 and overcame a pair of bogeys on the back nine Sunday to win this tournament for the third time in four years.

“I’ve been very comfortable on this golf course for the last 20 years,” Sluman said. “It’s hard to explain. It doesn’t mean you’re going to play well but I’ve had success here and I think that’s because I am comfortable.”

On a day when most of the leaders struggled just to break even, Sluman had five bogeys and closed with three straight pars to finish at 10-under 206 and seal his first victory since winning here in 2009. He also took the title at Pebble Beach in 2008, making Sluman the only three-time winner of this event.

Sluman is also the first player on the Champions Tour to win the same event three times since Jim Thorpe won the season-ending Charles Schwab Cup Championship in 2003, ’06 and ’07.

Afterward as he stood outside of the scorer’s trailer waiting for the rest of the field to finish, Sluman paused to talk with Crenshaw.

“The king of Pebble Beach,” Crenshaw said with a grin before repeating himself.

Sluman wouldn’t go that far but clearly his history on this plush, picturesque course along the Monterey Peninsula made a difference.

Five different players had at least a share of the top spot on the final day, including second-round leader Jay Haas.

But Haas, like the rest of the pack, faltered at key moments and gave way to Sluman. A day after carding a 65 at Pebble Beach, the 57-year-old Haas had three birdies, four bogeys and one double-bogey to close with a 75.

“I don’t feel like I played 10 shots worse,” Haas said. “It seemed like every decent putt I got at, it was either downhill or had a 3- or 4-foot break to it, and I just never seemed to have a putt that I could run at. It was a very difficult day.”

Defending champion Ted Schulz shot 75 and was tied for 27th at 215.

Haas opened his round with consecutive birdies to get to 12 under. Sluman, playing two groups ahead of Haas, birdied No. 3 but pulled a bogey on the par-3 fifth to fall back to 8 under.

“I kind of forgot about the tournament at that point,” Sluman said.

Instead of going in the tank, Sluman hung on. He birdied two of the next four holes, survived a bogey on No. 10 then birdied Nos. 13 and 14.

Haas and Clampett were one stroke back at the time but both had double bogeys on the par-5 No. 14 and fell out of the chase while Sluman claimed his fourth Champions Tour title.

“I’ve played it under those conditions before and there’s not much you can do,” Sluman said. “You just have to have a game plan and really try to stick to it. Pebble always finds a way to come back and get you throughout the course of a week and you just really have to stay patient.” 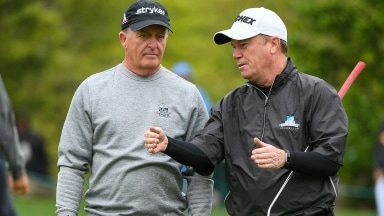 Fred Funk and Jeff Sluman teamed to shoot a course-record 10-under par on Saturday to take the opening-round lead in the PGA Tour Champions' Bass Pro Shops Legends of Golf at Big Cedar Lodge. 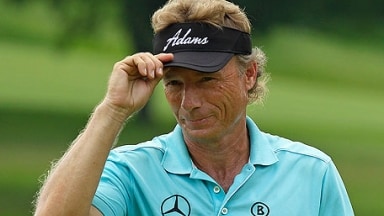 Bernhard Langer made a short birdie putt on the second hole of a playoff with Jeff Sluman to win the Senior Players Championship on Sunday. 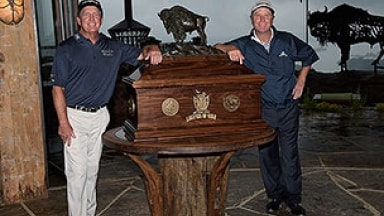 Jeff Sluman and Fred Funk teamed to win the Champions Tour's Legends of Golf on Sunday.