Stenson closing in on money title in Race to Dubai 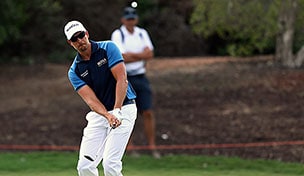 DUBAI, United Arab Emirates – Henrik Stenson strengthened his chances of winning the European money title, shooting a 4-under 68 Thursday that left him two shots behind leader Alejandro Canizares after the first round of the season-ending World Tour Championship.

Having already won the PGA Tour's FedEx Cup, Stenson also leads the Race to Dubai standings and was two shots ahead of nearest rival and playing partner Justin Rose, who had a 70.

Ian Poulter of England, third on the money list, shot a 69. Fourth-place Graeme McDowell of Northern Ireland birdied three straight holes, starting from the 14th, for a 72.

Canizares also birdied three straight from the 14th and was one shot ahead of Thailand's Kiradech Aphibarnrat and Australia's Marcus Fraser.

Stenson said he felt no ill effects from an injured right wrist that restricted his practice to nine holes this week on the Earth Course at Jumeriah Estates. His round could have been even better had it not been for the last hole. He said he was ''a bit tired'' coming to the par-5 18th, which he three-putted for his only bogey.

''So while that was frustrating it was a good first round,'' he said. ''I am playing good and there is no real need to worry about the game out there, and it's one day down and three to go.

''My wrist felt good today and it hasn't been bothering me that much. It's after the round that it stiffens up a bit and starts to swell up and look inflamed, but it feels all right at the moment.''

Rose trails Stenson by $287,033, with the winner in Dubai earning $1.3 million. The Englishman mixed three birdies with a bogey on the 17th, and saved par at the 18th with a 20-foot putt.

''I feel as though I got a good score out of today by holing that putt on the last because finishing bogey-bogey would have left an awful taste in the mouth,'' Rose said. ''So, all in all, I am satisfied as it is a start I can build on. But then in saying that, Henrik got off to another strong start and he seems to do that in all his tournaments recently.''