Stenson takes control in Dubai with 64 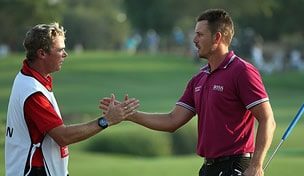 He is looking to become only the second Swede in 76 years to win the European title. He was five shots ahead of his Race to Dubai rivals. Countryman Robert Karlsson in 2008 won the European Order of Merit.

''They are chasing me as good as they can, and I know neither one of the guys are going to back down,'' Stenson said. ''So it is better I keep my foot down and my head down and try and keep the momentum going.''

Stenson had eight birdies in a bogey-free round to move to 12-under 132 halfway through this event at Jumeirah Estates.

Justin Rose, second in the Race to Dubai, and Ian Poulter, who is fourth, lost ground to Stenson. They were in a group at 137. Graeme McDowell, third on the money list, had a 68 and was eight strokes behind Stenson.

Stenson has yet to win on the European Tour this year.

''The key for me this summer was that I have been up so many times, and when I needed the putts to drop they did in Boston (Deutsche Bank Championship) and when I played really well to win in Atlanta (Tour Championship),'' he said.

''I thought that 5 under par would be good enough for me to just stay in the tournament, which I am happy about,'' Rose said. ''But then this golf course seems really tailor-made for Henrik. He just seems to be able to take advantage of all the par 5s, and he's playing really, really well. It will be tough to catch him.''

Defending champion Rory McIlroy shot a 5-under 67 that included a 14th-hole eagle, to be tied for ninth on 6 under.

''It's nice to know going into the weekend you still have a chance to win the golf tournament, and that's the stage I've been trying to get to for the last few months,'' he said. ''I finally feel like I've got to the stage now where I can contend week-in, week-out.''