SAINT-QUENTIN-EN-YVELINES, France – Graeme Storm of England shot a bogey-free 6-under 65 to share the lead with Richard Green of Australia after the first round of the French Open on Thursday.

Green looked set to take the sole lead but bogeyed the par-4 17th, after having made five birdies in six holes from the ninth. Storm had four birdies on the back nine – including on the 17th – to join Green one shot ahead of George Coetzee of South Africa, James Morrison of England and Thorbjorn Olesen of Denmark.

“It’s nice to see my name on the leaderboard, especially coming out on 18,” said Storm, who won the French Open in 2007. “You kind of remember that you’ve won it before and you’ve been in this position before.”

Italian teenager Matteo Manassero shot a 68 to share sixth place with 10 other players, after recovering from a double bogey on the second hole by making an eagle on the next.

The Albatross course has a reputation for being treacherous because of its many water hazards, but Green said he enjoyed the challenge.

In the afternoon, Coetzee had three birdies in a row to climb atop the leaderboard, one stroke ahead of Storm and Green. But the South African bogeyed the 15th and 17th to slip back to third.

Olesen finished strong with birdies on his last two holes to go level with Coetzee.

“I didn’t make enough birdies today,” Kaymer said. “But level par is an OK score and I didn’t kick myself out of the tournament.”

“On the front nine, I missed a lot of fairways and I couldn’t put myself in good birdie chances,” Kaymer said. “That was the problem because the first five, six holes, they are pretty easy on the golf course. They are the scoring holes usually.”

American lefty Bubba Watson (74), 2008 winner Pablo Larrazabal of Spain (74), and last year’s runner-up Francesco Molinari of Italy (75) will have to improve on Friday to make the cut.

For players were disqualified for breaching a rule after finding water on the last hole.

Rikard Karlberg of Sweden, Damien McGrane of Ireland, James Ruebotham of England and Jaco Van Zyl of South Africa all dropped their balls from the wrong place, as only players whose ball went beyond a certain point were allowed to use the drop zone.

“The local rules are very clear,” European Tour senior referee Andy McFee said while showing to reporters a sheet with the rules on it. “It says at the 18th hole, the drop zone can only be used if the last point of entry is beyond the green stake. It stands out in big, colored letters.”

“Players have to read and understand the local rules,” McFee added.

“Players spend hours and hours on the practice round trying to save a shot. Well, five minutes in the rule book can have exactly the same effect.” 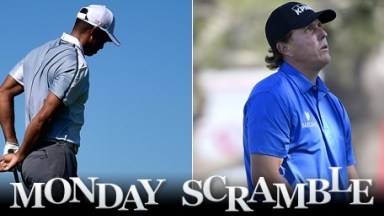 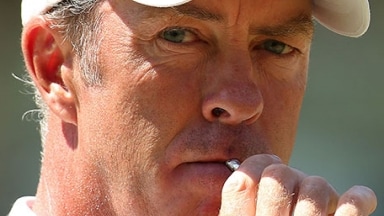 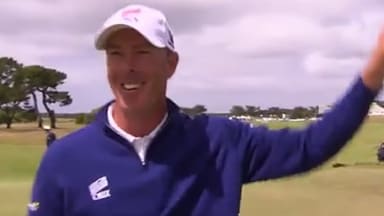 Richard Green made a hole-in-one on a par-4 on the Australasian Tour, after his ball popped out of a bunker.