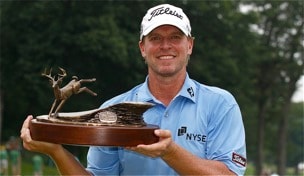 SILVIS, Ill. – Steve Stricker’s third straight victory in the John Deere Classic certainly was the most challenging – and by far the most dramatic.

With nine holes to play, Stricker led by five strokes. With two holes left, he was two shots down.

Twice, Stricker buried shots deep in bunkers, one so far under the sand he had a hard time finding the ball. At a third bunker, he had to take an awkward stance just to give himself a chance to swing.

But he won nevertheless, sinking a 25-foot putt from off the 18th green Sunday to beat rookie Kyle Stanley by one stroke.

“It became hard, real hard,” said Stricker, who was grateful for the encouraging words from caddie Jimmy Johnson.

“Jimmy was right there telling me the whole time, you know, it’s not over yet, just keep plugging, you never know what’s going to happen,” Stricker said. “And sure enough, he was right. Just play it all the way out and see what happens.”

Stricker’s clutch putt capped a roller coaster round on a steamy afternoon and gave him a 2-under par 69, good enough to make him the 10th golfer since World War II to win a tournament three straight times.

Despite a double-bogey on No. 5, when he needed two shots to get out of a greenside bunker, and bogeys on 15 and 16, Stricker finished at 22-under 262. Stanley, 23, whose best finish previously had been a tie for 12th at the Arnold Palmer Invitational in late March, closed with a 66.

Matt McQuillan, who had missed the cut in his previous 10 tournaments, shot a 64 to tie Zach Johnson (65) for third at 17 under. Charles Howell III (64) and Chez Reavie (72) were another stroke back.

Stanley zoomed in front with birdies on five of the first six holes on the back nine, and kept the lead by salvaging par on 17 after sending his tee shot into a grove of trees. But he missed a 9-foot par putt on 18 to open the door for Stricker, who took advantage.

Stricker had fallen two behind with those back-to-back bogeys, which seemingly ended his hopes of a threepeat.

“I really did feel like the momentum was gone for a while,” he said. “Those holes kind of derailed me there.”

But he regrouped quickly. Stricker knocked in a 15-foot putt for birdie on 17 to cut Stanley’s lead to one stroke, then made what turned out to be a tournament-saving shot from a bunker on the left side of the fairway on 18.

Standing with his left foot in the bunker and his right foot on the lip, Stricker hit the ball solidly and left it on the fringe of the green behind the pin, drawing a huge roar from the crowd.

The next roar was even louder. Using his putter, Stricker sent the ball toward the cup and watched it curl in from the left side. The 44-year-old from Madison, Wis., a crowd favorite at this tournament, backed away as the ball neared the hole, then raised his arms and pumped his fist to celebrate the moment.

“It’s weird,” Stricker said. “When I get into a situation where I have to make a putt, I feel like my nerves kind of go away and I focus extremely hard on trying to make that putt. And that’s kind of like the little zone I got into on 17 and 18, I guess.”

With the victory, Stricker joined a small but noteworthy group of golfers who have won a tournament three years running. The list reads like a Who’s Who’s of the game and includes Tiger Woods, Arnold Palmer, Jack Nicklaus, Tom Watson, Ben Hogan and Johnny Miller.

Woods has done it six times and Palmer twice.

“I kept telling myself that it’s not a big deal and it really wasn’t – until today,” Stricker said. “That back nine trying to win, it’s just really hard. I don’t know any other way to say it. It’s extremely hard to put it away.

“When you watch guys like Tiger put away all those tournaments, anybody who’s put it away down the stretch, it’s a difficult thing to do. But I’m happy to come out on top. I made a couple of putts when I had to.”

Woods also is one of just four golfers who has won a tournament four straight years. The way Stricker has mastered the TPC Deere Run course, you can’t discount his chances of joining that group, too.

Stricker finished 26 under at last year’s tournament and was 20 under in his 2009 victory.

So, was he ready talk about four in a row.

“No,” Stricker said with a smile.

Stanley claimed a nice consolation prize, earning the spot in the British Open that goes to the highest finisher in this tournament who’s not already qualified. But if it hadn’t been for Stricker’s late heroics, Stanley would have had his first victory on the tour.

“I’m very excited to go over there,” he said. “But I’m still trying to calm down from that round.”

After his par save on 17, Stanley got into trouble on 18 when he went from the rough to a greenside bunker. He was in good position to salvage par again when he chipped up to 9 feet, but he missed the putt and took bogey, giving Stricker the opportunity he needed.

Stricker won for the second time this year and 11th time in his career, with eight of those victories coming after he turned 40. He won the Memorial a month ago and now has multiple wins in three consecutive years.

Only four others have done that since 2000: Woods, Phil Mickelson, Vijay Singh and Ernie Els.