PLAYA DEL CARMEN, Mexico - Brian Stuard topped the OHL Classic leaderboard at 5 under with three holes left Thursday when first-round play was suspended for the day because of rain and wet conditions.

More than 3 inches of rain soaked the Mayakoba Resort since early Wednesday night.

''The biggest thing was the lightning threat and the rain we received,'' said Slugger White, the vice president of rules and competition for the PGA Tour. ''We absolutely lost the golf course. With this rain it just knocked us out.''

Stuard had six birdies and a bogey. He had his best career PGA Tour finish in the 2010 event, tying for second behind Cameron Beckman.

Defending champion John Huh had yet to tee off. He won the February 2012 event for his first PGA Tour title, parring the eighth hole of a playoff with Robert Allenby. The playoff matched the second-longest in tour history. Huh closed with a 63, while Allenby had a double bogey on the final hole of regulation.

The PGA Tour event offers full FedEx Cup points for the first time and the winner will get a spot in the Masters. It was previously played opposite the World Golf Championships-Accenture Match Play. 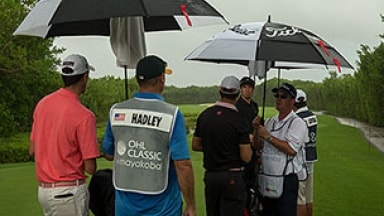 The OHL Classic’s move to November is off to a predictably soggy start.