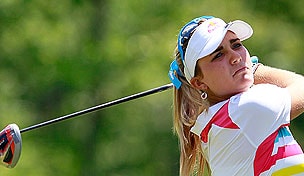 Getty Images
SINGAPORE - FEBRUARY 27: Ai Miyazato of Japan hits her third shot on the 5th hole during the third round of the HSBC Women's Champions at Tanah Merah Country Club on February 27, 2010 in Singapore, Singapore. (Photo by Andy Lyons/Getty Images)  -

DUBAI, United Arab Emirates – Last year, it was a chat with the stars from the ''Twilight'' franchise. This year, it's a meeting with Tiger Woods and a role in his popular golf video game.

Life keeps getting more surreal for American teenager Lexi Thompson, who is in the United Arab Emirates to defend her title at the Dubai Ladies Masters, which begins Wednesday. She won the tournament in 2011 at 16 to become the youngest winner on the LPGA and European Tour. She then lost her LPGA record to Lydia Ko, a 15-year-old amateur from New Zealand, who won the Canadian Women's Open in August.

Thompson hasn't won a tournament this year, but with four top-five finishes on the LPGA, her star keeps rising. With that come the perks of celebrity. She got to meet the 14-time major winner Woods this summer at the Notah Begay Challenge in August.

''It was amazing, just meeting a role model. I've always looked up to him, so it was great to meet him and talk to him,'' Thompson said. ''And he said I'll play golf with you any time, and that means a lot coming from a person at that level.''

Just as ''amazing'' was being invited to play a role in the video game, Tiger Woods PGA 14. She grew up with the game and played Woods with her golf-playing brothers. Now Thompson looks forward to playing herself. It should be much like the real Thompson – she strapped sensors on her body, head and shoes to ensure the game was as realistic as possible. 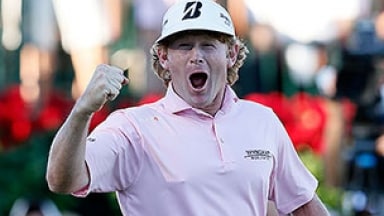