Thompson leads after 66 on Day 3 in Malaysia 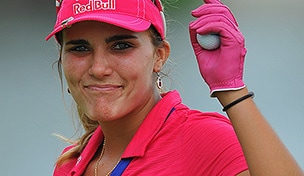 Getty Images
MEDINAH, IL - SEPTEMBER 28: Phil Mickelson and Keegan Bradley of the USA celebrate on the 17th green after defeating the McIlroy/McDowell team 2&1 during the Afternoon Four-Ball Matches for The 39th Ryder Cup at Medinah Country Club on September 28, 2012 in Medinah, Illinois. (Photo by Andrew Redington/Getty Images)  -

KUALA LUMPUR, Malaysia – Lexi Thompson shot a 5-under 66 Saturday to take a three-shot lead ahead of South Korea's Ilhee Lee after the third round of the LPGA Malaysia.

The 18-year-old American had five birdies in her bogey-free round for a 17-under total of 196. Lee held the overnight lead but mixed three birdies with two bogeys for a 70. Suzann Pettersen was another three strokes back after a 67, tied for third with Shanshan Feng of China.

Thompson is aiming for her second career tour title and first since the Navistar LPGA Classic in 2011.

''I felt really well going into today, I had a good practice session before my round, so I was pretty confident,'' Thompson said. ''Every player wants to go into the final round with a lead.''

Pettersen has switched golf balls for this week and said she's hitting it longer as a result, but she struggled with her putting all day.

''I'm playing pretty steady, hitting almost 18 greens, and not making a putt. It's very hard to stay patient,'' Pettersen said. ''Four under is pretty much the worst score I could shoot. Just glad there is one more round tomorrow. Lexi is playing great, so there's definitely a low one needed tomorrow.''

Sweden's Anna Nordqvist had the best round of the day with a 65 to climb from joint 29th to a tie for fifth alongside Karine Icher of France at 204.