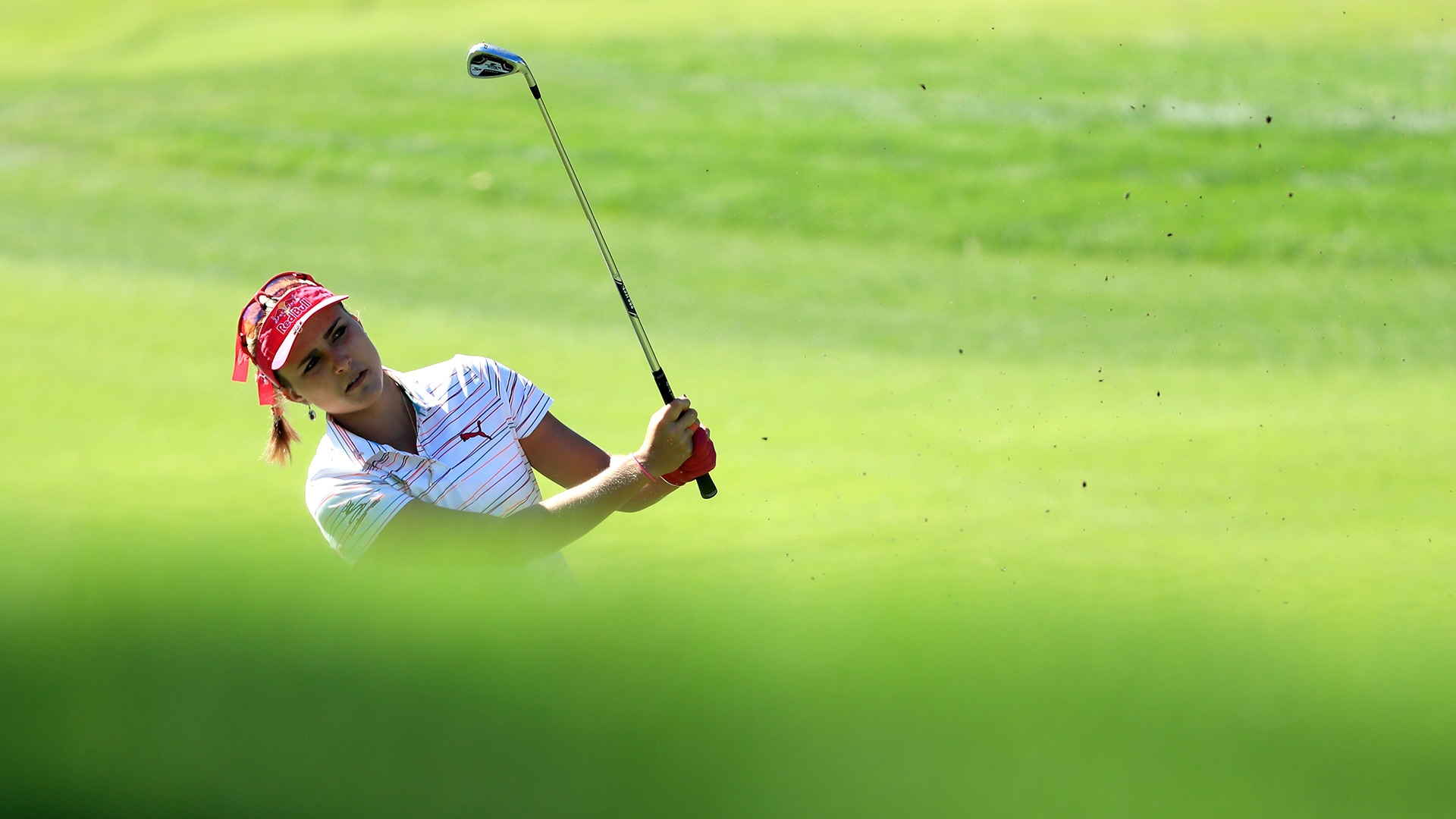 RANCHO MIRAGE, Calif. - Lexi Thompson powered her way to the top of the ANA Inspiration leaderboard Friday, using length and strength to counter the thick rough.

''If you're going to hit it crooked out here, you might as well hit it far and crooked, so you have a shorter shot in,'' Thompson said. ''But it's very thick. I had some really nasty lies out there.''

Trying to win the major championship for the second time in three years, Thompson birdied the final hole for a 4-under 68 and a share of the second-round lead with Ai Miyazato at 7 under.

Miyazato, tied for the first-round lead with Azahara Munoz, followed her opening 67 with a 70. The 30-year-old Japanese player also finished with a birdie, hitting to 2 feet on the par-5 ninth.

Short off the tee and in stature at 5-foot-2, Miyazato is far more conservative than Thompson at tree-lined Mission Hills.

''I don't really want to be too aggressive on this golf course,'' Miyazato said. ''You need to be really patient and you need to be smart for the course management.''

The Kia Classic winner Sunday in Carlsbad, the 18-year-old Ko fought allergies that affected her vision.

''I'm currently one-eye blind,'' Ko said. ''I don't have very good eyesight, especially my left side is the worst, so it was really irritating me. Hopefully, it will be OK by tomorrow.''

''I definitely could have shot a few shots lower out there, but I hit some bad shots out there, too, that I got away with it,'' Thompson said. ''I recovered really well. That's what you have to do in majors. If you hit a bad shot, you have to pick yourself up and go to the next one.''

That was evident after she drove into the right-side trees on the narrow par-4 16th. She escaped with a mighty hooked pitching wedge under the trees, leaving a 15-foot putt that she nearly holed for birdie.

The winner in Thailand in February for her seventh tour title, she's using a new big-headed putter and has scrapped her eyes-closed routine and narrowed her stance.

''It's a dramatic change,'' Thompson said. ''Just changing to the Cure putter and a little bit different stance over the putts has given me a lot of confidence. I'm rolling it a lot better, and having my caddie, Benji (Thompson, no relation), line me up has helped me out a lot, too.''

Miyazato rebounded from a bogey on the par-3 eighth with the birdie on No. 9 to set up a Saturday pairing with the long-hitting Thompson.

''I played with her many times and I really like to play with her,'' Miyazato said. ''It just doesn't matter this golf course if you hit long or not. You need to be really staying with your game.''

Miyazato was third in the Kia Classic for her first top-10 finish since April 2013. Ranked No. 1 in the world for 11 weeks in 2010, the nine-time LPGA winner is 90th now after climbing 67 spots Monday.

Chun is returning from a back injury that sidelined her for a month. The U.S. Women's Open champion was hurt when she was struck by a hard-case suitcase that rival player Ha Na Jang's father dropped down an escalator at the Singapore airport.

''During the time I had injury treatments back in Korea, I was so depressed and I lost my appetite and motivation,'' Chun said. ''Once I got here, I began to get my motivation back.''

Jang was 5 under after a 70. She bogeyed her final hole after a poor drive.''It was a really big miss off the tee,'' said Jang, a two-time winner this year.

''That was fun,'' Wie said. ''I definitely felt like I could have made a lot more. I just felt like a blind person out there. I hit a lot of good putts. I just misread them slightly.''

DIVOTS: Defending champion Brittany Lincicome, paired with Thompson, was 3 under after a 69. Last year, Lincicome eagled the final hole of regulation and beat Lewis on the third hole of a playoff. Lincicome also won the event in 2009. ... Munoz had a 78 to drop into a tie for 48th at 1 over. ... Amateurs Hannah O'Sullivan and Albane Valenzuela each shot 73 to make the cut. O'Sullivan, the U.S. Women's Amateur champion, was 1 over, and Valenzuela 2 over. The 18-year-old O'Sullivan is a high school senior in Chandler, Arizona. Valenzuela, also 18, is from Switzerland.