Thompson, Park trail by one at Ochoa Invitational 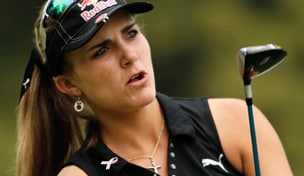 Getty Images
“I wouldn’t say that he didn’t see that I was ready, but you do have a feel when the other guy is going to hit. Right as I was in the top of the backswing, I think he must have pulled like a 5-wood or a 3-wood and obviously everybody started screaming. So that didn’t help very much. It’s unfortunate.” – blaming Tiger Woods after blocking a shot deep into the woods during The Players. (Getty Images)  -

GUADALAJARA, Mexico – Sweden's Anna Nordqvist and South Korea's So Yeon Ryu each birdied the final hole for a share of the second-round lead with Thailand's Pornanong Phatlum on Friday in the Lorena Ochoa Invitational.

Nordqvist and Ryu shot 5-under 67 to match Phatlum at 9-under 135 at Guadalajara Country Club.

Nordqvist and Ryu played in the same group.

''I'm always really happy to play with Anna,'' Ryu said. ''We have so much fun always, so I love it. We pretty much played so well, especially on the back nine. We hit a really great shot and she made every birdie putt. I was really excited to see her, to see how she is playing.''

Nordqvist is winless on the tour since the 2009 LPGA Tour Championship.

''We're only halfway through and, obviously, the best golfers in the world are here so you can't really think about winning or leading the tournament right now,'' Nordqvist said. ''We have two more days, so you have to try to play your game and put low scores out there.''

Phatlum, the first-round leader in the 36-player event, had a 69.

''I'm very happy with my score, but the putting not very good,'' Phatlum said. ''I just missed a few short putts.''

South Korea's Inbee Park was a stroke back along with Americans Lexi Thompson and Gerina Piller. Thompson had a 64 for the best round the first two days. Piller shot 65, and Park had a 68.

''I just went into today playing fearless and just committed to my lines,'' Thompson said. ''I dropped a few more putts today, and that always helps.''

The top-ranked Park swept the first three major championships of the season and has three other LPGA wins this season. She's winless in eight starts since the U.S. Women's Open in late June.

Second-ranked Suzann Pettersen and No. 3 Stacy Lewis were tied for ninth at 6 under.

Pettersen had a 68. The Norwegian player is coming off a successful title defense in the LPGA Taiwan, her third victory in her last five starts and fourth of the season.

Michelle Wie had a 73 to drop into a tie for 20th at 2 under. She won the 2009 tournament for the first of her two LPGA victories.

Defending champion Cristie Kerr was 27th at 2 over, following a 77 with a 67.

''It's been great. I love Mexico,'' Piller said. ''Most people don't know this, but my maiden name is Mendoza. I don't speak much Spanish, but I love the food, love the people and it's just a great tournament. I never got to play with Lorena, but she's been a huge inspiration.''