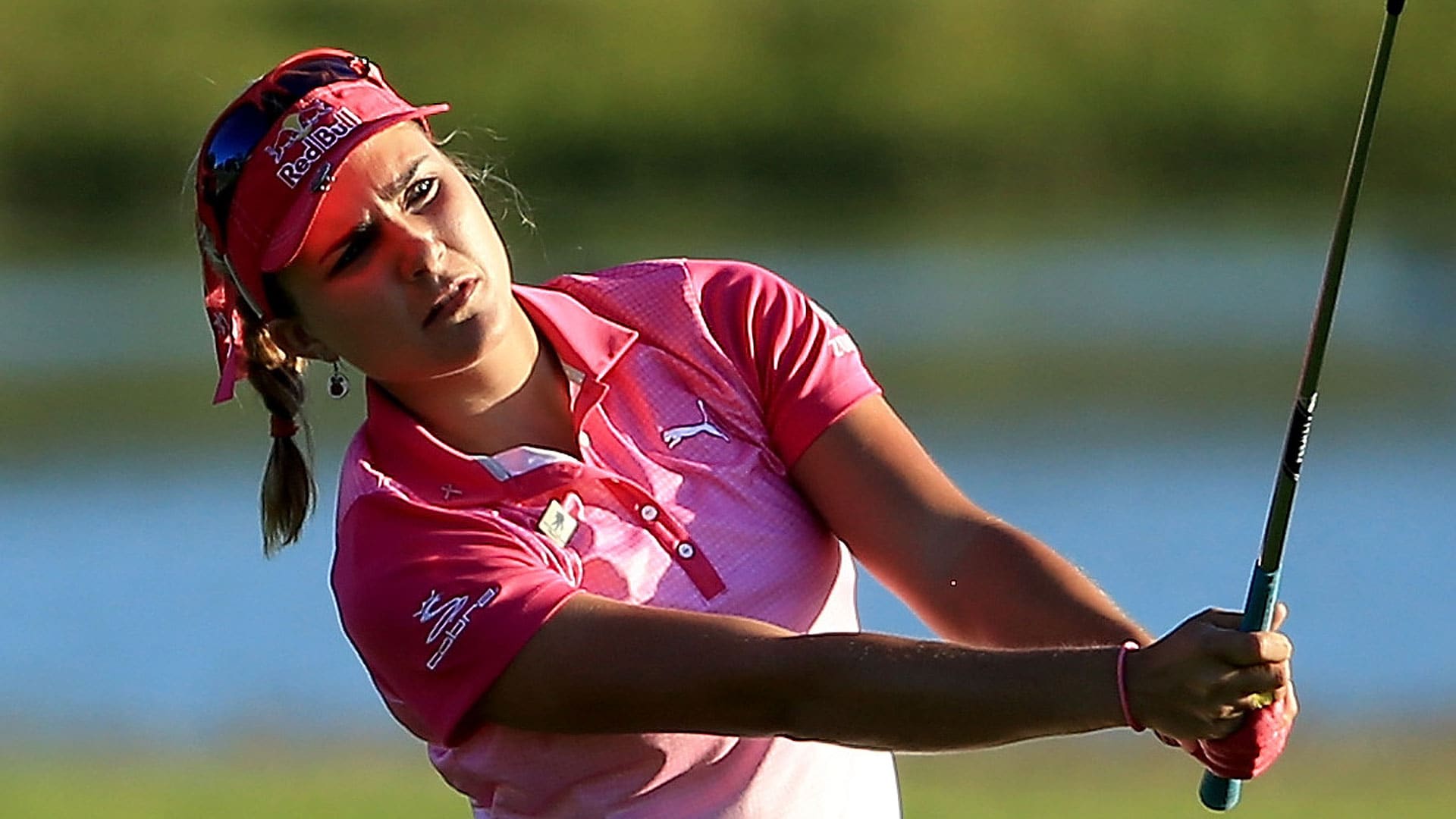 RANCHO MIRAGE, Calif. - Lexi Thompson rallied Saturday to put herself in position for a run at another victory leap into Poppie's Pond. For most of the warm afternoon at Mission Hills, it looked as if her new big-headed putter might end up in the drink - or in a twisted heap in the nearest garbage can.

Overcoming her struggles on the greens, Thompson made two late birdies and curled in a 15-foot eagle putt on the par-5 18th hole to take a one-stroke lead into the final round of the ANA Inspiration.

''It was definitely a bit frustrating,'' Thompson said. ''I just tried to stay positive. I did get frustrated. I'm not going to lie. But I just tried to remind myself the putts I did make the last two days, and remember those strokes and getting that feeling, and basically telling myself to just put a more confident stroke on it, put some more speed on it.''

Her putting problems started on the par-3 fifth when she missed a 4-foot birdie try. She three-putted for bogeys on the par-3 eighth and par-4 10th, missing from 5 feet on eight and 6 feet in 10.

''I was hitting it well, just couldn't get the putts to drop,'' Thompson said.

Trying to win the major championship for the second time in three years, the 21-year-old American shot a 3-under 69 to reach 10 under. A day after making a 30-foot birdie putt on 18, she hit a 207-yard, 5-iron approach that settled pin-high to the left to set up the left-to-right breaking putt.

''To knock it in on 18 is always the most amazing feeling here,'' Thompson said. ''To finish like that definitely turns around my confidence. I feel really good going into tomorrow. ... I do know what it takes to win on this golf course. I mean, I absolutely love this golf course.''

The long-hitting Thompson took the flat stick out of the equation with short irons to 2 feet for birdies on the par-4 15th and 16th. She nearly had a third straight birdie, but couldn't get a 6-footer to fall on the par-3 17th.

''I was just putting a little timid and then hit a few good shots coming in, so I had a few short birdie putts,'' said Thompson, the winner in Thailand in February for her seventh tour title.

Top-ranked Lydia Ko, In Gee Chun and Ariya Jutanugarn were tied for second, and fifteen players were within four strokes of each at the top of the leaderboard.

Ko shot a 69, a day after fighting allergies that led to vision problems. On Friday, she repeatedly changed her contact lenses, irritating her left eye to the point that she said she was ''one-eye blind.''

''I was a little worried about my eye, but it was great today,'' Ko said.

The 18-year-old New Zealander won the final major last season, the Evian Championship in September in France, and is coming off her 11th LPGA title last week in Carlsbad.

''I felt like I struck the ball much better today and I hit a few more fairways, so the less time you're spending in the rough, the better,'' Ko said. ''I feel like today I was able to control my shots and kind of have an idea where the ball was going to go.''

Chun got up and down for birdie on 18 for her third straight 69. The 21-year-old South Korean player is returning from a back injury that sidelined her for a month. She was hurt when she was struck by a hard-case suitcase that rival player Ha Na Jang's father dropped down an escalator at the Singapore airport.

''Tomorrow, I'm just going to focus on my game again,'' Chun said. ''The only thing I can control is my mindset, my mental game, myself.''

Jutanugarn had a 67. The 20-year-old Thai player is winless in the LPGA. At age 17 in the 2013 LPGA Thailand, she closed with a triple bogey to blow a two-stroke lead.

''Whatever it is, I'm going to take it and have fun and enjoy tomorrow,'' Jutanugarn said.

Miyazato and Charley Hull were 8 under. Miyazato birdied the 18th for a 71, and Hull birdied the final four holes for a 69.

Michelle Wie topped the group at 7 under after a bogey-free 70.

Wie is winless since the 2014 U.S. Women's Open and hasn't had a top-10 finish in 30 events since the last tournament that year. In her last two starts, she missed the cut in Phoenix and tied for 60th in Carlsbad.

''You kind of have to grind it out when you're not hitting the ball as well,'' Wie said. ''But I'm very proud of what I did today. I hung in there, had some good birdies. Hopefully, I'll give myself more opportunities tomorrow and take advantage of them.''