Thompson trails by 1 after 63 in Malaysia 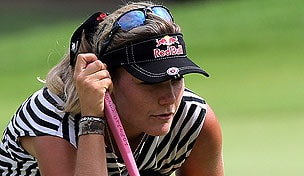 KUALA LUMPUR, Malaysia – South Korea's Ilhee Lee retained a one-stroke lead at the LPGA Malaysia, while American Lexi Thompson shot an 8-under 63 in the second round on Friday.

Thompson surged on the back nine with four birdies and an eagle on the par-4 14th at the Kuala Lumpur Golf and Country Club.

''It was right on line,'' Thompson said of the eagle. ''But I couldn't see the bottom of the hole, but a few of the volunteers up by the green started yelling, so I was like, 'All right, maybe it went in.'''

Thompson, who finished third in the recent Evian Championship, is chasing her second tour victory.

Last week's Reignwood Classic champion, Shanshan Feng of China, also shot 65 and was third at 10 under.

Paula Creamer of the United States and I.K. Kim of South Korea were tied for fourth at 9 under.

Amy Yang of South Korea shot a tournament-record 62 to move into a tie for sixth, five shots off the pace.

Defending champion and top-ranked Inbee Park shot par and was at 1 under.