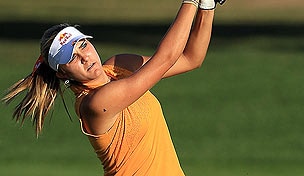 GOLD COAST, Australia – Lee Bo-mee of South Korea made seven birdies for a 7-under 65 to take a one-stroke lead after Thursday’s first round of the Australian Ladies Masters.

U.S. Open champion So Yeon Ryu led early, but finished a stroke back at Royal Pines, tied with fellow-South Korean Hee Kyung Seo and Christel Boeljon of the Netherlands.

Lexi Thompson had five birdies in an error-free round to sit two strokes off the pace with England’s Felicity Johnson and Australian duo Nikki Campbell and Stephanie Na.

Lee was a six-shot runner-up to Karrie Webb in the 2010 Masters.

Ryu, who teed off from No. 10, said she felt the weight of expectation after her major win.

“The first few holes I was very nervous as it is my first tournament of the year,” she said. “But on the 12th hole I made a nice birdie putt so I could finally relax.”

Ko bogeyed two of her last four holes to finish with a 70.

“She’s an amazing player. She’s so consistent, she barely misses shots,” Thompson said of Ko. “She’s not scared of anything, you can tell.”