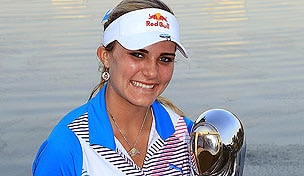 DUBAI, United Arab Emirates – Teenager Lexi Thompson has made history as the youngest winner on both the LPGA and Ladies European Tours.

The 16-year-old Thompson shot a 5-under 67 Saturday to win the Dubai Ladies Masters, becoming the youngest professional winner on that side of the Atlantic.

Thompson pulled away from Lee-Anne Pace of South Africa to win by four strokes for her second professional victory. In September, she became the youngest winner of an LPGA tournament at the Navistar LPGA Classic in Alabama.

“It feels amazing,” Thompson said. “I’m just honored they invited me back and I’m just grateful to be here. I’ve been working on my game really hard and it has paid off.”

Thompson chipped in for a birdie on No. 9 to take a one-shot lead over Pace and extended her lead with four birdies on the back nine for a 15-under 273 total.

Pace (69) started strong with two birdies and an eagle on her first six holes, but shaky putting on the back nine ended her chances.

The 2010 European Tour money winner, Pace hit her approach shot on No. 12 over the green for her second bogey in five holes.

“Things could have been a little different,” Pace said. “I hit a bad club on 12, which cost me a shot, and that is where things changed around.”

Sophie Gustafson of Sweden (71) was a shot behind Pace in third place followed by four players another shot back.

Michelle Wie (72) came into the final round five shots behind leader Thompson. She fell out of contention with two bogeys and a double-bogey on the front nine, finishing tied for 12th.

“It was pretty frustrating. I couldn’t get my putts going,” Wie said. “I just needed to play better on the front nine all week. Nothing really went. Nothing went in. At least, I finished birdie, birdie. I gotta work on a lot of things for next season.”

Thompson’s father Scott, who caddies for her, said he was most impressed how she handled the pressure when Pace made her run.

“She didn’t panic and kept playing her game, not worrying about what else anyone was doing,” he said.

Wie offered a congratulatory tweet and predicted she would be force to be reckoned with in the future. The 22-year-old Wie praised the support Thompson gets not only from her father but her entire entourage.

“I think she kind of has that mentality, just grip it and rip it,” said Wie, who also joined the LPGA Tour at 16 and has two wins. “She just goes out there and just kind of has fun, which is really nice to see. She’s a really talented player and I’m really impressed.”

Thompson is projected to move into the top 40 in the rankings. She credits her success with playing alongside her brothers, including PGA Tour member Nicholas.

The precocious Floridian qualified for the U.S. Women’s Open at age 12 in 2007 at Pine Needles, tied for 10th at the tournament last year and was a runner-up by one shot last year at the Evian Masters, one of the richest events on the LPGA Tour schedule.

Her breakout moment came in September when she won the Navistar LPGA Classic by five strokes and was granted LPGA membership two weeks later.

The unfailingly polite, easy-going Thompson said she was looking forward to spending some time with friends and steadily improving next season.

“There’s not really any pressure,” she said. “I’m just playing the game and doing what I love. Playing every week in these tournaments is an honor for me, so I’m just coming out and relaxing and doing my best.”

Her father also tried to tamp down expectations, saying he just wanted to relish her second victory since she turned pro a year-and-a-half ago.

“The first one wasn’t a fluke. She has won again now. That is the great thing,” he said. “The first one people may say she is lucky for the week. But she won again, so it kind of validates it.”