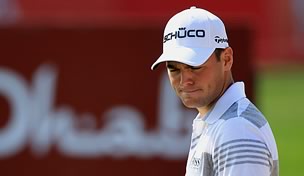 Getty Images
TURNBERRY, SCOTLAND - JULY 19: Retief Goosen of South Africa hits his third shot on the 5th hole during the final round of the 138th Open Championship on the Ailsa Course, Turnberry Golf Club on July 19, 2009 in Turnberry, Scotland. (Photo by Ross Kinnaird/Getty Images)  -

ABU DHABI, United Arab Emirates – Martin Kaymer missed the cut at the Abu Dhabi Championship on Friday, a year after he won the title by eight strokes.

The three-time Abu Dhabi champion shot a 1-over 73 to leave him 6 over for the tournament.

Kaymer, who had come in as a favorite considering his past success on the course, blamed his putting for his troubles, adding that he “didn’t have a lot of birdie chances” on Friday. He said he was hoping to score well but shrugged off his troubles as “a little bit of a rough period for me these last couple of days.”

“Expectations were very high,” the German said. “When you go to a tournament where you’ve played very well in the past, you expect you’re going to be successful somehow and it hasn’t happened this week. It’s OK. I practiced hard in the winter and it will come together at some stage.”

Kaymer appeared to be rebounding from his opening 5-over 77 when he had two birdies on his first nine holes. But after the turn, he had a bogey and a double-bogey over the next three holes to seal his fate.

Kaymer last missed a cut at the KLM Open in November.

Until this year, Kaymer has treated the Abu Dhabi course as his home-away-from home, winning the last two tournaments at the National Club at the Abu Dhabi Golf Course, finishing second in 2009 and winning in 2008.