Tiger, Rory two back after 36 holes 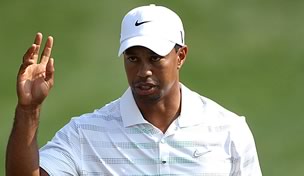 Getty Images
VIENNA, AUSTRIA - SEPTEMBER 19: Rafael Cabrera-Bello of Spain tees off at the 15th during the third round of the Austrian Golf Open at Fontana Golf Club on September 19, 2009 in Vienna, Austria. (Photo by Richard Heathcote/Getty Images)  -

ABU DHABI, United Arab Emirates - Tiger Woods moved into contention in the second round of the Abu Dhabi Golf Championship Friday, stringing together three birdies on the back nine to sit two shots behind surprise leader Thorbjorn Olesen of Denmark.

Woods, who was three shots back after the first round, finished with a 3-under 69 for a two-round total of 139. He started slowly, but came to life on the back nine, hitting three birdies over five holes. He also dropped a shot on the 16th after an errant drive landed in deep rough.

“I thought I played well today,” Woods said after saving par on 18. “I made a couple putts here and there, but it was tough out there. The greens got a little quicker, a little bit drier, and the rough is certainly getting deeper and more lush.”

Olesen (67) is at a 7-under total of 137 and has a one-shot lead over two players including 18-year-old Italian Matteo Manassero (65). Woods is another shot back in fourth, tied with six other players including Northern Irishman Rory McIlroy (72) and Robert Karlsson of Sweden (72).

A group of five players including Spain’s Sergio Garcia (69), Ireland’s Padraig Harrington (69) and South Africa’s Charl Schwartzel (70) is another shot back at 140.

It was a day of mixed fortunes at the Abu Dhabi Golf Club. McIlroy’s round was marred by a two-shot penalty for brushing away sand in front of his ball that sat on the fringe on the 9th. Meanwhile, fourth-ranked Martin Kaymer failed to make the cut in a tournament he has won three times. And then a relatively unknown 22-year-old Dane surged into the lead of the star-studded tournament in a bid to win his first event on the European Tour.

Much of the attention, though, was on Woods as he bids to follow up his season-ending victory at the Chevron World Challenge with another win. The Chevron success ended a two-year run without a victory, a period in which the 14-time major winner endured a series of injuries and saw his personal life collapse.

Woods had a bogey-free first round but admitted the greens were fooling him for much of the day. He seemed to sort them out on Friday, making several key putts including a 10-footer for his final birdie on 15. But he said players “were grinding along” and that it was anyone’s tournament to win with the leaderboard featuring nine players within two shots of Olesen.

Still, the former No. 1-ranked golfer said he felt he had come a long way in the past year. He is optimistic that the changes in his swing instituted by new coach Sean Foley are starting to pay dividends.

“Certainly I have much more experience within the system, and I’ve grown to understand what Sean wants me to do and how my body is going to do those things and produce the numbers he wants me to produce,” Woods said. “If you would have asked me (six to eight months ago) if I would understand the system as well as I do and the numbers I’m producing, I probably would have said no … Now I do and when we talk, it’s very simple.”

While Woods was the picture of consistency Friday, the big-hitting McIlroy took fans on a roller coaster ride after holding a share of the lead after the first round.

The 22-year-old U.S. Open champion, playing with Woods for a second day, opened with a bogey and double bogey after an errant drive and some shaky putting. He bounced back with three birdies before carding a double bogey on the 9th when he was given a two-shot penalty for brushing away the sand in front of his ball—after playing partner Luke Donald spotted the infraction and called him on it.

But rather than get rattled, McIlroy went on to produce two birdies on the next three holes to end at even par.

“Obviously that wasn’t the best start, 3 over through three, and I battled back really well to get it back to even par after eight,” McIlroy said. “Made a mistake on 9 when I brushed the sand off the green, wasn’t thinking clearly and a penalty there. Felt like I played the back nine well, and even par, considering everything that happened out there today is a decent score.”

Players are allowed to brush away sand on the green but not on the fringe.

“I mean, my ball was just maybe six feet off the green and there was a lot of sand in between my ball and the hole. I just brushed the sand and Luke was like, ‘I don’t think you can brush sand off the fringe’,” he said. “And I’m like, ‘Oh, yeah, you’re right’. Just one of those things … You’re going to get a bad deal every now and again, and just have to take it on the chin and try and come back and get the shots back as quick as possible.”

The performances of the day came from Manassero, who got himself into contention with a bogey-free round that included seven birdies, and Olesen who had seven birdies on his first 12 holes. The 21-year-old Dane said he was just happy to be in the mix of a tournament that features the best players in the world.

“For me, it’s very special. It’s not many years ago I was watching them on TV,” Olesen said. “I know it’s tough, but I’m trying to keep playing my own game and do my best.”

Kaymer headlined the list of 60 players to miss the cut of 2 over, shooting a 1-over 73 to leave him 6 over for the tournament. The 27-year-old German, who had come in as a favorite after his past success on the course, blamed putting for his troubles, saying that he “didn’t have a lot of birdie chances” on Friday. He said he was hoping to score well but shrugged off his troubles as “a little bit of a rough period for me these last couple of days.”

“Expectations were very high,” he said. “When you go to a tournament where you’ve played very well in the past, you expect you’re going to be successful somehow, and it hasn’t happened this week. It’s OK. I practiced hard in the winter, and it will come together at some stage.”British Open winner Darren Clark also missed the cut after shooting a two-round total of 9-over 153. Others failing to qualify for play on the weekend included Colin Montgomerie of Scotland (147), Edoardo Molinari of Italy (149), American Todd Hamilton (149) and Michael Campbell of New Zealand (149).