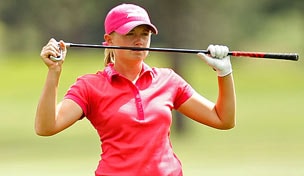 Getty Images
PERTH, AUSTRALIA - FEBRUARY 18: Paul Casey of England is given a surfing lesson by Jaala Baldock a Surfing instructor for Surfing WA on Trigg Beach in Perth as a preview for the 2009 Johnnie Walker Classic tournament at the Vines Resort and Country Club, on 18 February 2009, in Perth, Australia (Photo by David Cannon/Getty Images)  -

COLORADO SPRINGS, Colo. – When the rain stopped, Stacy Lewis got off a school bus wondering if she was in the U.S. Open or the twilight zone.

By the time the strange ordeal was over Friday, she had lost her lead and was barely hanging onto her cool.

Going for her second major of the year, Lewis made a bogey and double-bogey shortly after a 66-minute rain delay and the lead she held through almost the entire marathon day at the U.S. Women’s Open turned into a two-shot deficit to I.K. Kim.

Kim was at 4 under with four holes to play when the second round was suspended by darkness. Lewis, who had led by as many as four shots earlier in the day, was tied for second with Wendy Ward at 2 under with two holes left.

“We sat in a school bus,” Lewis said of the way she spent the thunderstorm delay. “It was 20 people in a little school bus. There was no place to go, you couldn’t do anything, it was hard to get loose again. Just kind of unfortunate – unfortunate the way it all worked out, I guess.”

But maybe to be expected during a week that has been interrupted by two afternoon thunderstorms, which has forced backup plans to be replaced by more backup plans.

Only 33 of the 156 players made it through their second round Friday and 66 never made it to their tee time.

Among those were amateur Amy Anderson, who played six holes early in the morning to close her first round and finished the day in the three-way tie for second at 2 under.

Another shot back is Paula Creamer, along with Karrie Webb, who is in a group of four at 1 under who hadn’t teed off.

Ryann O’Toole headed into the break one shot behind Lewis, but she also struggled on the restart. She made three bogeys over the next four holes to fall to even par.

Seeking to complete the career Grand Slam, Yani Tseng couldn’t get going during her day of start-and-stop golf. She was 3-over par with two holes to play.

“I think I was just trying too hard,” Tseng said. “I’m trying to play well, trying to hit it close to the pin. Sometimes when you try harder, the worse you get.”

The last hour of Friday’s round felt more like a causal walk through the park at twilight than a major championship. The rain and lightning chased almost all the fans away and the players were playing in front of dozens of marshals, a few friends and family and the sounds of children playing on swing sets outside the fences at the Broadmoor.

Quite a different feel from earlier in the day, when some players figured they’d be grinding through 36 holes on a typically difficult U.S. Open setup made tougher by the long days and the long course – a record 7,034 yards.

Nobody was grinding better than Lewis, who became the first (and still only) player to reach 5 under with a birdie on the par-4 fifth hole. It seemed like days – not hours – had passed as she walked to the parking lot in the dark.

“It’s hard to sit in a bus for an hour, then go right back out there and play and get the intensity back,” Lewis said.

After a bogey on No. 14, Lewis fell out of the lead on 15 when she left a greenside bunker shot short of the putting surface, then needed three shots to get down from there. She pushed her tee shot on the par-3 16th short right into a bunker and pounded her club into the ground.

After saving par there in the dimming light, she and playing partners Brittany Lincicome and Na Yeon Choi walked off the course, even though the horn hadn’t sounded yet.

One group in front of her was Betsy King, the 55-year-old six-time major winner, who will come back Saturday morning, putt out on No. 17, then play one final hole before she calls it a career. King was 18 over, with no chance of making the cut.

Does she wish it was over?

“In my position, certainly,” she said. “Because I’m not going to make the cut and I have to come out and play in the morning again, which I did this morning.”