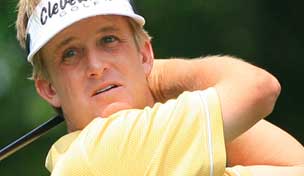 FORT WORTH, Texas – David Toms was beginning to wonder if he could ever win again on the PGA Tour. Now he has the most satisfying victory of all.

More than five years after he last won, a week after losing in a playoff and a day after blowing a seven-stroke lead at the Crowne Plaza Invitational to go into the final round trailing, the 44-year-old Toms shot a 3-under 67 on Sunday to win at Hogan’s Alley.

“I’m not dreaming, am I? This is actually happening, right?” Toms asked when he entered the interview room wearing the championship plaid jacket. “Wow, I didn’t know if this day would ever come again.”

Toms regained the lead for good from Charlie Wi with an eagle with a wedge shot from 83 yards at the par-5 11th hole, and finished 15 under – a stroke ahead of Wi.

“It’s one of the most perfect shots I’ve ever hit,” Toms said.

Toms’ long-elusive 13th career victory came a week after a playoff loss to K.J. Choi at The Players Championship, when he missed a short par putt on the extra hole for his sixth runner-up finish since last winning in January 2006 at the Sony Open in Hawaii.

“To win after this time frame and to come back after what happened last week certainly means more to me than any other victory,” said Toms, the 2001 PGA Championship winner.

Wi started the final round with a one-shot lead that he quickly expanded with birdies on the first two holes. He finished with a 69 for his fourth career runner-up finish without a win.

“It’s great to finish second on the PGA Tour anytime, but it’s a little bittersweet,” Wi said. “I had a three-shot lead after the first two holes and thought I had a pretty good handle on myself, in control. … I certainly didn’t give it to him. He definitely earned it.”

After that playoff loss at TPC Sawgrass, Toms had an opening 62 at Colonial for his best score in 429 rounds – since a career-best 61 in his Hawaii victory. Toms followed with another bogey-free 62 to match the PGA Tour scoring record for the first 36 holes of a tournament (124), and opened the third round with another birdie.

At 17 under through 37 holes and seemingly in control, Toms instead had three bogeys in the next five holes. There was later a three-putt from 7 1/2 feet for double bogey and Wi took the lead with a 32-foot birdie at the par-3 16th Saturday.

Wi, the 39-year-old South Korean who made his 100th cut on the PGA Tour this weekend, had the two opening birdies Sunday while playing partner Toms missed both greens but managed pars.

Toms finally caught up at 13 under after Wi missed the green with his approach at the par-4 10th and two-putted from 13 feet for a bogey.

“The momentum I think started (to change) on 10, because I was one shot ahead of him and I was in the middle of the fairway,” Wi said. “The killer was my poor drive on 12.”

The clincher for Toms came on Colonial’s longest hole, the 635-yard 11th.

After laying up to a perfect spot short of the green, and Wi’s ball sitting in a frontside bunker, Toms’ wedge shot from 83 yards bounced once, landed just behind the pin and then rolled back into the cup.

Toms pumped his arms over his head with a wide smile on his face before Wi blasted to 4 1/2 feet for a birdie putt that still had him a stroke behind.

Wi then hit out of the same fairway bunker twice at the par-4 12th hole after his errant drive. He managed a bogey after finally hitting out of the fairway to 7 feet, but Toms’ 5-foot par stretched his lead to two strokes.

Toms became the first player on the PGA Tour to rebound from a playoff loss one week to winning the next since 2000, when Phil Mickelson won at Colonial after losing in a playoff at the Byron Nelson Championship.

A day before his wedding anniversary, and a previously planned two-week break after four consecutive tournaments, Toms earned a check of $1.116 million.

Bo Van Pelt (65) finished third at 10 under. Defending Colonial champion Zach Johnson also shot a closing 65 to finish at 9 under in fourth place, while Robert Karlsson (67) and Chez Reavie (68) were 8 under.

After a bogey at No. 4 when his tee shot at the difficult 247-yard par 3 missed the green left, Wi quickly rebounded by draining a 35-foot birdie putt at the 481-yard 5th hole. He pumped his right fist and smiled, still with a three-stroke lead with Toms still even on the day.

But things soon started to change.

At No. 6, Toms putted off the fringe with an 18-foot birdie chance that slid just past the hole. He still gained a stroke when Wi missed a 4-foot par putt. The margin was down to one after Toms’ birdie at the 440-yard No. 7 hole, when he hit his approach to 10 feet.

Wi made another birdie on the 192-yard 16th hole Sunday, an 8-footer. But Toms sank a 4 1/2 -foot par to maintain his two-stroke edge, and give him a needed margin since he bogeyed the 17th hole after his approach into a greenside bunker.

“It was nerve-racking, I can tell you right now, I was shaking on the greens,” Toms said.

“I kept it interesting until the last hole,” Wi said, “so I’m very pleased with that.”