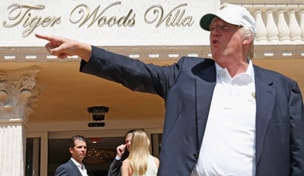 DORAL, Fla. – Rory McIlroy was teeing off on the ninth hole during a practice round for the Cadillac Championship when someone approached and asked him to stop play for a few minutes, because of a pressing matter in the area.

The issue: Donald Trump's nearby helicopter was taking off.

Much is different these days at the Blue Monster, the signature attraction at Trump National Doral, the site of this week's World Golf Championships event that starts on Thursday. Trump owns the resort and decided the course needed a total makeover, so within a few hours of Tiger Woods winning for the seventh time at Doral a year ago, the bulldozers came in and started giving the place a whole new look.

Near the course sits the the Ivanka Trump Ballroom, and the Donald J. Trump Grand Ballroom, and yes, his helicopter was flying about while most in the field was familiarizing themselves with the place Wednesday.

That even includes Woods, who probably doesn't feel like a defending champion, since the course he prevailed on so many times is really no more.

''I've got no idea about what that golf course holds out there except for what is on video,'' Woods said before he went out to walk around the rebuilt place. ''That's it.''

It's no secret that Trump loves golf, and it was clear Wednesday that he's thrilled with what he, his family and his team have done at Doral, which was renowned before he bought.

Trump's development business is apparently thriving, and next month he starts work on a property next to 1600 Pennsylvania Avenue in Washington, the little parcel of land where the White House sits.

''We have exciting jobs,'' Trump said. ''But to me none of them are as exciting as Trump National Doral.''

Trump called Doral ''a treasure'' and said it was daunting to try to rebuild the Blue Monster in basically just less than a year. The place has some serious changes to its look, which Trump said benefits both fans and players.

''For instance, there was a tremendous area of dead forest,'' Trump said. ''Most of the trees were sort of dying, dead, but when we took them out it just opened up the vistas. ... You have vistas into Miami, you have vistas right to the ocean where the wind pours in that you never really felt before. We took down massive areas of very bad stuff and all of a sudden, we saw a different kind of piece of land.''

Players, he said, have raved about the changes.

''Talking to some of the players and the caddies, they sort of think that the difficulty has been amped up a little bit more than we had thought,'' said Gil Hanse, the architect who is also designing the Olympic golf course in Rio de Janeiro. ''But I think it will still be very playable.''

When Woods was finishing up his news conference on Wednesday, the journalists in the room filed out fairly silently, like usual.

One person was clapping. It was Trump.

Hey, Doral's his course, so it goes by his rules.

''We are very happy with not only the way it came out, but the fact that we were able to complete it so quickly,'' Trump said.