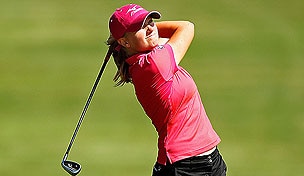 ROGERS, Ark. – Stacy Lewis and Yani Tseng shot rounds of 5-under 66 on Friday to share the lead of the LPGA Northwest Arkansas Championship after the opening day.

Tseng, the world’s No. 1 player and defending champion, eagled the par-5 18th hole with a downhill 6-foot putt to cap her round. Lewis, playing one group behind, birdied the 18th with a 5-foot putt to share the lead.

“Normally toward the end of the day we get crowds sort of dwindling a little bit,” Lewis said. “So everybody hung around and it was – I mean, I don’t know, you can’t get the smile off my face right now.”

“I felt very comfortable, confident after that hole,” Tseng said. “I was hitting my shot straighter than I saw it because I kind of worked on my shot. And my caddie kept telling me, ‘Your swing is good, don’t think too much.’ That helped a lot.”

Lewis said the pressure of finishing well and appeasing fans in her “hometown tournament” was tough to handle during the opening round.

“I can just feel it in people,” she said. “They want the putts to go in, they want the shots close and I have to kind of take a step back and kind of relax a little bit. I think I told myself on one of those last two putts, ‘You’re here by yourself. There’s nobody else here, you’re on the putting green just trying to make these putts.’ I know if I’m near the lead towards the end, I’m definitely going to have the advantage.”

Karen Stupples, Taylor Leon and Jin Young Pak were all at 4 under. Suzann Pettersen, the world’s No. 2 player, was another stroke back in a group of nine that included Paula Creamer and Morgan Pressel.

Pettersen went to the 18th tee level for the lead, but she made a bogey after landing in a green-side bunker in two shots and then taking three putts.

Michelle Wie, who finished second here last year, had six bogeys and a double-bogey for a 78.

The hole-in-one on the 190-yard 11th was the second professionally for the second-year pro and third in her golfing career.

“It was right at the pin the whole way, but since it was early in the morning, the sun was pretty low and I couldn’t see anything,” said Lindberg, 25. “I saw a bounce that was pretty straight to the pin. They were kind of excited up there, but not hole-in-one excited.”