Tseng one back in Australia; Pettersen shoots 80 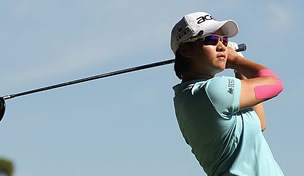 MELBOURNE, Australia – Stacy Lewis and Sarah Kemp shared the Women’s Australian Open lead at 4-under 69 on Thursday, leaving top-ranked Yani Tseng a stroke back in her bid to win the event for the third straight year.

Lewis, the Kraft Nabisco winner last year, had six birdies and two bogeys in the LPGA opener at historic Royal Melbourne, the 2011 Presidents Cup venue that is hosting a women’s professional event for the first time.

“I’m much more confident, just with the year I’ve had,” Lewis said. “I had such a consistent year. I was in contention quite a bit and you just get comfortable there. You don’t worry when you’re a couple under and you see your name on the leaderboard and it’s not that big of a deal.”

Kemp had a bogey-free round.

“I had a 3-footer on eight for birdie and I missed it,” Kemp said. “There were no really good saves, it was just pretty solid … hit the fairway, hit the green.”

Tseng won the tournament, sanctioned this year by the LPGA for the first time, the last two seasons at Commonwealth Golf Club. The Taiwanese star went on to win 12 worldwide titles last year, including major victories in the LPGA Championship and Women’s British Open.

Long-hitting American Brittany Lincicome, a two-time winner last season on the LPGA, and Paraguay’s Julieta Granada matched Tseng with a 70 in the event also sanctioned by Australian Ladies Professional Golf and the Ladies European Tour.

Many top players struggled on the sand-belt course. Four-time winner Karrie Webb and fourth-ranked Cristie Kerr shot 75, Morgan Pressel had 76, and second-ranked Suzann Pettersen and fellow European Solheim Cup star Sophie Gustafson shot 80. Pettersen’s score was her second highest in LPGA play, following an 81 in the third round of the 2007 Evian Masters.

Laura Diaz birdied the opening hole and was 1 under through six, then played the final 12 holes in 10 over – eight bogeys and a double bogey – to finish at 82.

The Netherlands’ Christel Boeljon, the Australian Ladies Masters winner last week, had a 74.