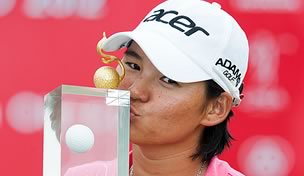 The 23-year-old Taiwanese star shot a 6-under 66 to finish at 19-under 269 on Siam Country Club’s Pattaya Old Course. She opened with a 73, then shot consecutive 65s to enter the final round a shot behind Miyazato.

Before the tournament she made a wish on a lucky Thai statue.

“I had some luck out there,” Tseng said. I shot 1 over the first round, but I came back very soon and played 20 under the next three days. I felt like I could improve a lot and I feel like something gave me luck.”

“I just wish I could win this tournament,” she said.

Last year, Tseng won the event for the first of her seven 2011 LPGA Tour victories, including major victories in the LPGA Championship and Women’s British Open. The five-time major champion finished the year with 12 worldwide victories. She has 33 career worldwide professional victories.

“I feel much more pressure coming into this year,” Tseng said. “Last year, when I started, I was nothing. I was just in the top 5 in the world, but I don’t have 12 wins or world No. 1 title. After last year, I have world No. 1 and I had 12 wins and that pressure keep going on and on.”

On the par-5 18th, she came through with the pressure on, nearly holing her 104-yard approach and tapping in for the winning birdie.

“It was an incredible shot. I think it’s the shot of the week,” Tseng said. “Especially, I saw that Ai hit it so close and I knew she was going to make that putt. So, I tell myself, `I need to get this close.’

“It was tough. I had 104 to the pin and a little uphill. I know my ball is going to spin a lot, so I just tried to keep it low and not spin too much. … I was very proud of myself for hitting that shot into 18 and making birdie to win.”

Miyazato, the Japanese player who won the 2010 tournament, also birdied the final two holes in her 67.

“Of course, Yani is No. 1, so I knew it wouldn’t be easy today,” Miyazato said. “I kind of expected her to play that way.”

South Korea’s Jiyai Shin, tied for the lead with Tseng after a birdie of her own on the par-4 17th, had a 67 to finish two strokes back.

Tseng eagled the par-5 opening hole and Miyazato had a birdie, leaving them tied at 15 under. Tseng took the lead with a birdie on the par-4 third, and added birdies on the par-4 sixth and par-5 seventh. At the turn, she had a three-stroke lead over Shin and four-shot advantage over Miyazato.

“I played really well on the front nine, but it was tough on the back nine, especially when you see Jiyai and Ai keep making birdies,” Tseng said. “It got tight down the stretch. It was tough. I feel like I had lots of emotions today.”

Shin, playing a group ahead of Tseng and Miyazato, birdied the par-4 10th to pull within two and gained another stroke when Tseng bogeyed the hole. Tseng pushed her lead to two with a birdie on the par-3 12th, but bogeyed the par-4 13th.

Miyazato birdied the 10th and pulled within one of Tseng with a birdie on the par-4 15th, then matched Tseng with a par on 16 and the birdies on 17 and 18.

“Overall, I played really well and I’m very happy that I could finish strong today,” Miyazato said about her season debut. “I really enjoyed playing with Yani, but next time I want to win.”

South Korea’s Amy Yang shot a 69 to finish fourth at 14 under.

Sixteen-year-old Thai amateur Ariya Jutanugarn followed her third-round 65 with a 74 to tie for 12th to 7 under. She played the final five holes in 4 over, making a double-bogey 7 on No. 18. Last year, Jutanugarn won the U.S. Junior Girls’ Championship and was the Rolex Junior Player of the Year.

Seventeen-year-old American Lexi Thompson had five back-nine birdies in a 66 to tie for 14th at 6 under.

“I’m really happy with the way I’m hitting it,” Thompson said. “I’m playing consistent. Just need to get a few more of those putts to drop like today.”

Second-ranked Suzann Pettersen had a 78 to drop into a tie for 21st at 4 under. She began the round four strokes out of the lead. 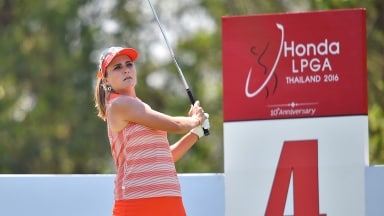 Defending champion Amy Yang carded a 3-under 69 to lead by one halfway through the LPGA Thailand on Friday. 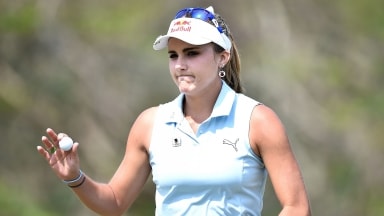 Lexi Thompson had two eagles in an 8-under 64 Thursday to take a one-stroke lead over Q Baek at the LPGA tour's Thailand tournament. 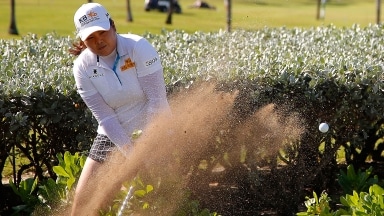 Park to return from back injury next week in Thailand

Inbee Park’s back injury is healing up and she will make her return to the tour at the Honda LPGA Thailand next week, her agent confirmed.