CONOVER, N.C. – Bob Tway decided to try the Champions Tour because he still enjoyed playing competitive golf. What disappeared in the shift from the PGA Tour was the intense pressure to win.

Two years later, the 1986 PGA Championship winner is about to test his new, relaxed persona.

Tway, the overnight leader, fired a 5-under 67 Saturday to move to 14 under and maintain a one-shot lead over Tommy Armour III in the Greater Hickory Classic. One more low round on a hot, humid weekend at Rock Barn and Tway could capture his first victory on the 50-and-over circuit.

“Of course, you should be a little nervous. That’s why you do it,” the 52-year-old Tway said. “But I may not be quite the same as I was on the other tour. I’d still like to win tournaments, no doubt after that.”

He’ll have plenty of competition.

Armour’s recent resurgence continued with four birdies over the final six holes for a 67. James Mason, looking to become the 12th Monday qualifier to win on the circuit, shot 65 and was two shots back along with Chip Beck (65), Mark Wiebe (68) and Mark O’Meara (67).

Nick Price, who overcame a double-bogey, Jeff Sluman and Mike Goodes sat three strokes behind and 29 golfers were within six shots of the lead.

“The guys are lighting it up,” said O’Meara, playing the event for the first time.

The intense heat – the temperature soared into the 90s Saturday – has tamed Rock Barn. Tway acknowledged how the course’s grounds crew has had to “baby the greens” with water while the fairways remained firm. That’s allowed golfers to target the flagstick on nearly every hole, with balls usually stopping on impact.

Tom Kite was the first to show just how low you could go. He had three eagles in five holes and posted a 28 before making the turn. Thoughts of a possible 59 faded with a bogey on his 10th hole and he sat six shots back.

After needing only 23 putts in a round of 63 on Friday, Tway wasn’t so hot with the putter a day later, where making par felt almost like you were going backward. He still managed seven birdies, including on 18 for the second straight day.

That’s been Mason’s attitude all year.

The Georgia native, whose lone victory came as a qualifier in his first season on the 50-and-over tour in 2002, lost his full-time playing privileges heading into the year. Then he turned 60 in January and started wondering about his future.

“I said as soon as I go downhill with my playing ability then I’ll certainly give it up,” Mason said. “I made a commitment this year that I was going to go to every qualifier I could go to and then evaluate it after the year.”

Mason had been 0 for 5 in Monday qualifiers, including failing to make the field last week in Iowa, yet was encouraged by his play in a few mini-tour events. It all came together when he fired a 62 on Monday that included an ace.

“I’m just delighted to be here,” Mason said. “Once I got into the tournament I felt fairly at ease.”

That showed in a bogey-free 67 on Friday. Then he heated up on the back nine Saturday in a round that included just 22 putts.

“I’m just going to try to go out there and not choke, I guess,” he said.

Tway won eight times on the PGA Tour – the last in 2003 at the Canadian Open. But he isn’t sure how he’ll react entering the final day with the lead.

“It’s hard to tell,” he said. “Relaxation is always a huge key to anything. I guess in what they call our second chance or whatever, the main thing is to just enjoy the process.” 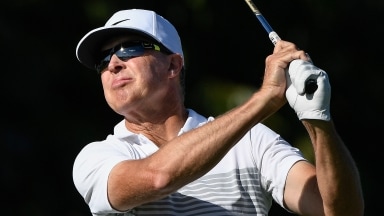 Bob Tway bogeyed two of the last three holes for a 7-under 65 and the first-round lead Friday in the PGA Tour Champions' Mitsubishi Electric Classic. 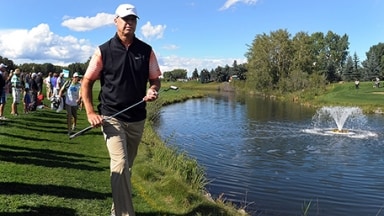 Bob Tway shot a 7-under 63 on Saturday for a share of the second-round lead with Joe Durant and Joe Daley in the Champions Tour's Shaw Charity Classic.

Bob Tway shot a 7-under 65 on Saturday to take a one-stroke lead over Mark Calcavecchia after the second round of the Champions Tour's Montreal Championship.