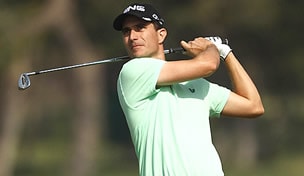 NEW DELHI – Alejandro Canizares of Spain and Peter Whiteford of Scotland both shot a 6-under 66 Thursday to share the lead after the first round of the Avantha Masters.

Whiteford made four straight birdies after the turn in a round that included a lone bogey on the fifth hole. Canizares also mixed seven birdies with one bogey, five of them on his back nine.

The 29-year-old Canizares, whose father Jose Maria was part of four Ryder Cup teams, is looking for his second European Tour title after the Imperial Collection Russian Open in 2006

“I played very steady and putted quite nicely,” Canizares said. “The only mistake I made was missing a short putt on the seventh, so I made a bogey.”

Federico Colombo of Italy was one stroke behind, while six players were a further shot back at the European Tour event.

John Daly, who showed signs of improvement when finishing fourth at the Qatar Open this month, was back to his worst in New Delhi.

The volatile American was second to last after a 79 that included a triple-bogey 8 on the 14th and five other bogeys.

India’s Jeev Milkha Singh was tied for 10th along with seven others on 69 while his compatriot and defending champion Shiv Shankar Prasad Chowrasia could only manage a 71.

Chowrasia said he was a little uncomfortable due to a wrist injury.

“I had pain in my left wrist during my practice round on Tuesday,” Chowrasia said.

For Whiteford, the four consecutive birdies starting from the 10th helped him surge up the leaderboard.

“That was a nice spurt to get me going,” the 31-year-old Whiteford said. “I three-putted the ninth as well, so it could as well have been five in a row.”

Whiteford said he was surprised by the accuracy of his drives, having struggled from the tee lately.

“It was the first time I’ve hit the fairways in months,” he said. “I think I’m last in the statistics for driving accuracy, but it seems to be going better now.”

Peter Whiteford was disqualified from the Avantha Masters early in his final round after several fans contacted officials to alert them to a rules violation. 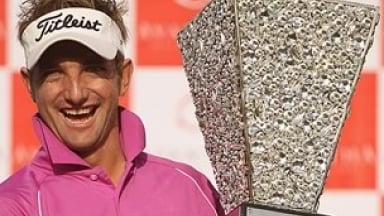 Jbe Kruger of South Africa won his first European Tour title Sunday, protecting his overnight lead by shooting a 3-under 69 for a two-shot victory at the Avantha Masters.

Peter Whiteford of Scotland shot a 4-under 68 Friday to take a two-shot lead after the second round of the Avantha Masters.