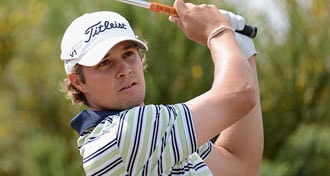 ST. ANDREWS, Scotland – Peter Uihlein came three inches away from shooting the first 59 on the European Tour on Friday when his eagle putt on the last hole came up just wide at the Alfred Dunhill Links Championship.

The American tapped in for birdie for a 12-under 60, equaling the course record at Kingsbarns but falling just short of getting his name in the record book.

''I knew I needed to make an eagle and I thought I hit a good putt,'' Uihlein said. ''I thought it would come back to the right but it kept going left.''

He was still two shots behind clubhouse leader Tom Lewis, who shot a 7-under 65 on St. Andrews for a 15-under total of 129. The players alternate between St. Andrews, Kingsbarns and Carnoustie over the first three days.

Having started on the back nine, Uihlein made eagles on the par-5 12th and third holes, and made his seventh birdie of the day on No. 7. That meant he needed to pick up two more shots to make European Tour history, but he parred the eighth, and his long eagle putt on the ninth stopped inches to the left.

''I had a lot of good moments today and I drove the ball well and hit a lot of wedges,'' Uihlein said. ''But it wasn't until my 17th hole or the eighth hole of the course, where I birdied to get to 11 under that I thought about a 59.''

Jim Furyk became the sixth player on the PGA Tour to shoot 59 when he did it at the BMW Championship two weeks ago.

This was the 17th time a player shot 60 on the European Tour. Branden Grace of South Africa did it on the same Kingsbarns course last year on his way to winning the tournament.

Lewis birdied three of his closing five holes to break clear of a crowded leaderboard. Joost Luiten of the Netherlands was a shot back after finishing his round with four straight birdies for a 63 on Kingsbarns.

Lewis is looking for his second tour victory after capturing the 2011 Portugal Masters in just his third professional start. Since then, he has managed just one top-10 finish and slipped to 657th in the world.

''There wasn't much wind out there, and 7 under really was not the worst it could have been but it definitely could have been a lot better,'' Lewis said. ''I've probably left it a little too late to have a good season but then it doesn't mean it's the end of the world.''