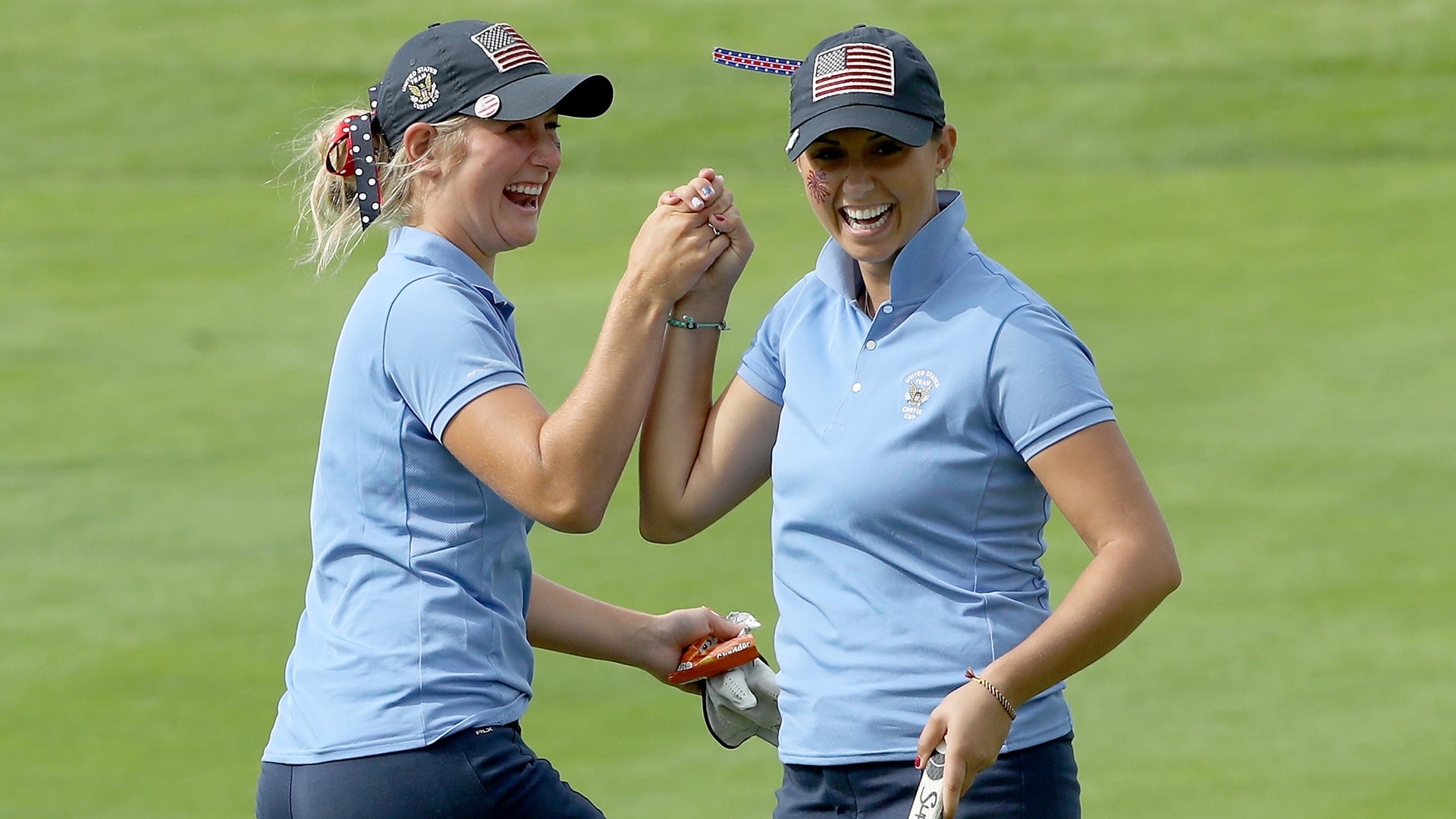 DUBLIN, Ireland – Bailey Tardy and Monica Vaughn teamed to win two matches Friday to help the United States tie Britain and Ireland 3-3 after the first day of the Curtis Cup.

Tardy and Vaughn beat Meghan MacLaren of England and Maria Dunne of Ireland 1 up in the morning foursomes matches to pull the U.S. to 2-1 at Dun Laoghaire.

''If we had lost all three, it would have been hard for the girls to pick themselves up,'' U.S. captain Robin Burke said about the morning victory. ''We feel fortunate that it's 3-3.''

The 19-year-old Tardy, a Peachtree Corners, Georgia, player coming off her freshman season at Georgia, and the 21-year-old Vaughn, a Reedsport, Oregon, player who will be a senior at Arizona State., were 3 down with 10 to play.

''We kind of said, 'Hey let's go, there's a lot of golf left,''' Vaughn said. ''It was huge. Our point in the morning maybe even helped our team in the afternoon.''

''Bailey and Monica have really stepped up to the plate and they're playing well together,'' Burke said. ''They're both long hitters and they like to have a lot of fun. They're fun to watch.''

After another round of foursomes and fourball matches Saturday, the biennial competition will close Sunday with eight singles matches. The United States needs 10 points to retain the Cup, and Britain and Ireland needs 10 1/2 to reclaim it. The U.S. leads the series 28-7-3, winning 13-7 in 2014 in St. Louis.

''They're very bubbly,'' Britain and Ireland captain Elaine Farquharson-Black said about her team. ''Everyone gets along. There's a lot of banter. It's good. We regroup and start again.''

O'Sullivan ended the match with a long birdie putt on 18.

''It's an incredible feeling,'' O'Sullivan said. ''I knew there was a lot of people watching. Standing over the putt, I saw the line really well. I knew Olivia had a really good chance for birdie and I didn't want to give her that opportunity. I just said 'good stroke' and get it rolling on my line, and I hit it on my line and I loved watching it roll in.''

England's Bronte Law played in two winning matches for Britain and Ireland. The UCLA player teamed with Northern Mehaffey to edge O'Sullivan and Galdiano 2 and 1 in the morning, and joined Ireland's Leona Maguire in the afternoon to top UCLA teammates Bethany Wu and Sierra Brooks 4 and 3.

''Some putts didn't really drop for our girls (in the afternoon), but I think we're in a really good position,'' Law said. ''Our captain seems very happy with our pairings.''

In the other morning match, Maguire and England's Charlotte Thomas beat Andrea Lee and Mika Liu 4 and 2.