A Wale of a Score 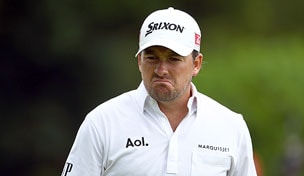 NEWPORT, Wales – Alexander Noren kept his lead at the Wales Open after a third round in which defending champion Graeme McDowell slumped to 11 strokes off the pace following a stunning collapse on Saturday at Celtic Manor.

McDowell shot an 81, sliding from a shot behind Noren on Friday to out of contention. The debacle comes just two weeks before he defends his U.S. Open title at Washington’s Congressional course.

Battling a hook in his swing exacerbated by the swirling winds across the course, McDowell made three bogeys, three double-bogeys and a quadruple-bogey at No. 12 as his wedge and putter let him down.

“I got off to a start where everything that could go wrong, did go wrong,” McDowell said. “My head was spinning and I was swinging the club pretty loose. I felt like I got heavily punished for some mediocre golf. It certainly wasn’t disastrously bad golf. But the golf course got so firm and fiery today that, in a tough breeze like that, any mistake was going to be exaggerated.”

He holed the first of his three birdies at No. 8 with a putt that snaked over the rise and crept into the cup, raising a wry smile from the Northern Irishman before he looked skyward and mouthed, “Thank you.”

Another birdie at the next meant the 42 strokes McDowell took for the front nine could have been worse. But a bogey at No. 11 preceded the horror show at No. 12, which evoked memories of Rory McIlroy’s final-round collapse at Augusta after his fellow Northern Irishman had a four-stroke lead.

Asked about the plan on Sunday, McDowell replied: “Just go out there and shoot 66 or 67 and go home and lick my wounds and get ready for Congressional. But, obviously, I’m infinitely disappointed right now. There’s some mental areas of my game that I’ve got to assess.”

Noren, an unheralded Swede who has qualified for his first American major later this month, dropped three shots on the front nine as he battled nerves and the strong breeze. But he recovered with three birdies in four holes from No. 11 and another at the last to retain his lead.

“I thought it was so much tougher than yesterday, especially around the greens,” he said. “Some putts played really slow and some played really fast, and I had a little bit of trouble getting the pace right.”

Hansen had the best round of the day after an eagle at the last following an approach shot that landed within two inches of the cup.